The island is a demonstration region for the ‘regional team approach’. Communicate. Cooperate. Coordinate. Collaborate. Share resources and learn from each other. CAVI, Convening for Action on Vancouver Island-Leadership in Water Sustainability, started with a conversation in 2005. Formally launched in September 2006, and funded by government, the form of the initiative has evolved over the years. The program has demonstrated what can be done through partnerships and collaboration. 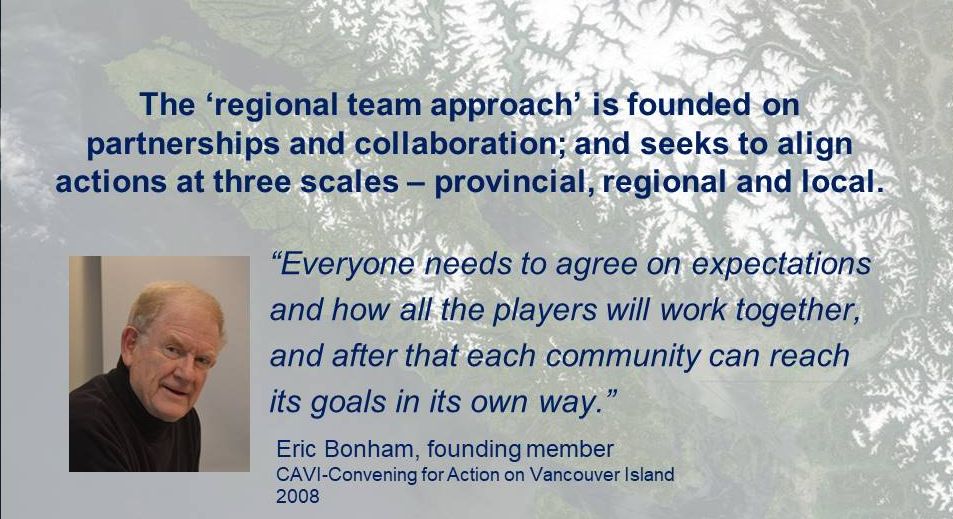 DRINKING WATER & WATERSHED PROTECTION IN THE NANAIMO REGION: “The Millstone River and EAP (Ecological Accounting Process) project are a vignette for the bigger mandate of the DWWP. Both demonstrate project level partnerships with stewardship groups; as well as partnerships across local government jurisdictions,” stated Julie Pisani, DWWP Program Coordinator, when the Partnership for Water Sustainability’s case study report on the Millstone River EAP Project was approved by the RDN Board (April 2021)

“The EAP methodology reflects the understanding that landowners adjacent to the stream corridor and setback zone and the broader community share responsibility for and benefit from the condition of the stream as well as the financial and ecological value of the land it occupies. The report suggests a general framework for local governments to consider in using the lens of ecological accounting within Corporate Asset Management Plans,” stated Julie Pisani.

GEORGIA BASIN INTER-REGIONAL EDUCATION INITIATIVE: “In the IREI program, we focus attention on the 4Cs – communication, cooperation, coordination, collaboration. The 4Cs guide what we do. We live and breathe collaboration. Building trust and respect starts with a conversation,” stated Richard Boase, Founding Director and Vice-President of the Partnership for Water Sustainability

Launched in 2012, the IREI facilitates peer-based learning among local governments located on the east coast of Vancouver Island and in the Lower Mainland. The IREI builds on the legacy of Erik Karlsen whose leadership inspired the original Georgia Basin Initiative in 1994. “The IREI is nested within the Water Sustainability Action Plan which, in turn, is nested within Living Water Smart. Cascading is the reverse way to think about this nesting concept. Each successive layer in the cascade adds depth and detail to enable the move from awareness to implementation – that is, action.,” stated Richard Boase.

INTERWEAVING WESTERN SCIENCE AND INDIGENOUS KNOWLEDGE: “My work related to water and reconciliation has put the spotlight on a new angle. Is reconciliation just dealing with the past and acknowledging the pain and moving on, or is it something more complex than that?” asked Michael Blackstock, Indigenous Independent Scholar and creator of Blue Ecology

“My question for the Western science world is this: Are you prepared and willing to change your definition of water in science? And if you are, what would the change in definition look like? No longer is it ceremonial. The methodology for Blue Ecology is about the actual work of interweaving the strengths of two cultures to reconcile them. It is time for First Nations to take a seat at environmental policy tables, as respected knowledge keepers who understand and respect water. Indigenous teachings can improve Western science,” stated Michael Blackstock.

SHORT-TERM GRATIFICATION VS INTER-GENERATIONAL LEGACY: “It really is important for us to be focused on the future. We have mapped out the next 10 years with Action Plan 2.0, but our vision really needs to remain focused on a much longer time horizon. 10 years is not enough. 100 years is what we need to be looking at.” – Randy Alexander, General Manager for Regional and Community Utilities, as quoted in the story of the Regional District of Nanaimo’s Drinking Water and Watershed Protection program, published by the Partnership for Water Sustainability in March 2021

“Externally, we have been successful at forging, developing and maintaining strong long-term partnerships; and realizing that we are all in this together. Our success depends on our ability to leverage our resources with those of others to achieve common goals, and to understand what those common goals are. The DWWP program has found that its natural role is to bring together diverse groups; and to identify what those common goals are so that we can efficiently pool our resources and focus our joint efforts to achieve results,” stated Randy Alexander.

NANAIMO REGION’S JOURNEY TO A WATER-RESILIENT FUTURE: “We are proud of our accomplishments over the last 10 years, and our vision remains focused on the future. The Drinking Water & Watershed Protection program helps us make informed decisions today, and create the framework for sustainable decision making for the long term,” stated Tyler Brown, Board Chair, Regional District of Nanaimo (April 2021)

Strong and enduring political leadership is a critical success factor. Over the past two decades, successive Regional Boards have handed the DWWP baton to their successors to carry on the mission. “The DWWP regional service was created explicitly to protect water at a watershed scale. The program is a leading example of how local governments can drive innovation and be a powerful influencer in watershed sustainability. Our recently adopted Action Plan for the next 10 years will allow the program to continue to innovate, better protect our water, and extend its reach,” stated Tyler Brown.

FLASHBACK TO 2005: “The District of Highlands is at a critical stage in its development and must clearly identify its future plan regarding density limits and land use planning goals,” stated Eric Bonham, Chair of the Highlands Stewardship Foundation, when he delivered a context presentation for a breakout session at the “Water OUT = Water IN” workshop that launched the Convening for Action in British Columbia initiative (April 2005)

The challenges facing the District of Highlands provided breakout groups with a case study application – identify key gaps and needs for evolving along the water management continuum and achieving a water balance. “The community has its own vision, united as it is by landscape – rocky uplands and dense coastal forests. This shared terrain has shaped a building and road pattern with a small ‘footprint” on the land, along with a unique rural lifestyle. These values are clearly identified in the Official Community Plan,” explained Eric Bonham.

WATERSHED MOMENTS, THE VIDEO TRILOGY: “Passion is the glue for collaboration when everyone shares a common set of values and a vision for reconnecting people, land and water,” stated Paul Chapman, Chair, Vancouver Island Symposia Series on Water Stewardship in a Changing Climate (ANNOUNCEMENT – just click on the links to view the Trilogy on YouTube)

“Producing three videos in just six months required an incredible commitment by all 15 members of the Watershed Moments Team . As I reflect on all three modules in the series, the thread that attaches them all is the different layers of responsibility that team members represent. Yet most team members only knew a few of the other members when we began our sprint to create the series. Through the shared experience of doing something bold and original, everyone connected and bonded in a way that would not have happened without COVID,” stated Paul Chapman.

“Our collaboration with regional partners is guided by a vision that working together we can increase the environmental, social, cultural, and economic sustainability of the biosphere region. VIU students have assisted with working on all the Ecological Accounting Process case study projects that have been completed in partnership with MABRRI. Both undergraduates and graduates have assisted with these projects,” stated Graham Sakaki.

FLASHBACK TO 2008: “We are turning the tide because development and redevelopment projects are now incorporating features for rainwater runoff capture,” stated the City of Nanaimo’s Dean Mousseau at the Vancouver Island Learning Lunch Series, a peer-based education initiative under the umbrella of the Water Sustainability Action Plan for British Columbia

The Inland Kenworth truck and heavy equipment facility in the City of Nanaimo illustrates what can be accomplished through collaboration when a municipality challenges a development proponent to be innovative. “We view this project as the one that has changed the thinking of the consulting community in Nanaimo, particularly on redevelopment projects,” stated Dean Mousseau when he reflected on the changes that had taken place in Nanaimo as an outcome of establishing the Inland Kenworth precedent for ‘designing with nature’.

FLASHBACK TO 2008: At the finale seminar in the Comox Valley Learning Lunch Series, participants explored a regional team approach in the context of a joint study by the Town of Comox and City of Courtenay to determine the source of flooding problems and identify drainage improvements in the inter-municipal Brooklyn Creek

“Flooding was caused by undersized culverts and poor grading. Traditional engineering solutions would have resulted in a linear total loss of habitat, would have significantly impacted on private property, and the costs were well beyond the the financial capacity of the Town. Instead, a course of action involving a suite of solutions was chosen. First and most important was a commitment by all jurisdictions to hold the line,” stated Glenn Westendorp.