Plan with a view to water – whether for a single site, a region or the entire province. Choose to live water smart. Prepare communities for a changing climate. What happens on the land matters – therefore, take into account potential impacts of land use and community design decisions on watershed function. Look at water through different lenses. When collaboration is a common or shared value, the right mix of people and perspectives will create the conditions for change. 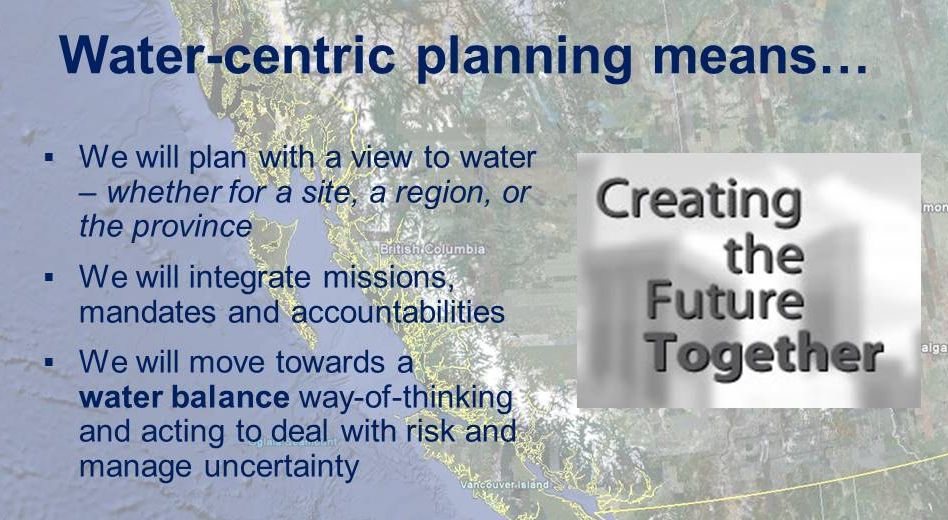 WATER SUSTAINABILITY ACTION PLAN: Historical context for evolving from a community-of-interest on the waterbucket.ca website to implement and mainstream “Water-Centric Planning” in British Columbia

“Originally, this COI was to be called Watershed-Based Planning for consistency with the community planning element of the Water Sustainability Action Plan. However, federal and provincial funding enabled us to broaden the scope of the COI to encompass a spectrum of perspectives, ranging from provincial watershed planning to local government community planning. This expanded scope is an ambitious undertaking. We are excited by the challenges that integration of perspectives involves,” stated Robyn Wark.

WATER SUSTAINABILITY ACTION PLAN: Metro Vancouver guidance document for a “Watershed / Landscape-based Approach to Community Planning” is the genesis for an actionable vision for water-centric planning in British Columbia

Published in March 2002 by the Greater Vancouver Regional District, the “Watershed / Landscape-Based Approach to Community Planning” was developed by an interdisciplinary working group and is the genesis of “water-centric planning”. “An important message is that planning and implementation involves cooperation among all orders of government as well as the non-government and private sectors,” stated Erik Karlsen.

METRO VANCOUVER’S ENDANGERED STREAMS: “Floods are now Canada’s most common and destructive ‘natural’ disasters. They are dramatic and widely covered events. Often overlooked are the smaller, more frequent events that threaten to destroy some of our most important waterways,” wrote Daphne Bramham, Vancouver Sun columnist (December 2021)

“The Tatalu is 30 kilometres long and another of Metro Vancouver’s most productive salmon streams. Underneath, an aquifer plays an essential role in regulating the river’s levels and temperature. Soon, much of it could be covered with cement and asphalt and the river constrained by a commercial/ industrial development following a recent decision by Metro to extend Surrey’s urban containment boundary. It is one step away from being developed as a commercial and industrial centre,” stated Daphne Bramham.

THE ERA OF WEATHER EXTREMES IS UPON US: “Ecology is not rocket science. It’s way more complicated. This is not to downplay the difficulty of rocket science, but to point out the incredible complexity of natural systems where all the variables aren’t known and are often connected to and influence one another,” stated Armel Castellan, meteorologist with Environment and Climate Change Canada (December 2021)

“Recent flooding in southwest B.C. (in mid-November 2021) was connected to the cumulative amount of rain falling in a short period of time. It was also linked to several record-breaking wildfire seasons which reduced tree cover on mountainsides and the vegetation that would normally have helped to absorb and slow water running into streams and rivers. The interconnectedness this year also included the almost unfathomable summer heat dome which set off a chain reaction — early drought, drier forests, and wildfires starting four to five weeks earlier than usual,” explained Armel Castellan.

THE ERA OF WEATHER EXTREMES IS UPON US: “The B.C. government was clearly warned over a decade ago that staffing levels at its River Forecast Centre were far below those at similar operations in Oregon and Alberta and that more than a doubling of employees was needed to provide effective flood-risk assessment and early notice to communities in harm’s way,” says researcher Ben Parfitt in a new report released by the Canadian Centre for Policy Alternatives (December 2021)

Ben Parfitt claims the under-resourced River Forecast Centre (RFC) was not timely in its warnings to British Columbians. “The late issuance of warnings by the RFC in the days and hours leading up to the horrendous flooding that has devastated Abbotsford, Merritt, Princeton and First Nations communities in recent weeks is coming under increasing scrutiny,” he says. Compounding problems, in Parfitt’s view, is poor communication from the government. Parfitt concludes, “In the face of silence, the flood of questions is certain to grow.”

SNOW MAY VANISH IN THE WEST: “In about 35 to 60 years, mountainous states are projected to be nearly snowless for years at a time if greenhouse gas emissions continue unchecked and climate change does not slow,” wrote Diana Leonard in an article published by the Washington Post (December 2021)

“A new study provides a glimpse into the future of Western U.S. snow and the picture is far from rosy. Due to rising temperatures, the region has already lost 20 percent of its snowpack since the 1950s. That’s enough water to fill Lake Mead, the nation’s largest human-made reservoir. It stands to lose another half, and possibly more, later this century, from the Rockies to the Sierra Nevada and into the Cascades of the Pacific Northwest, according to a literature synthesis conducted in the study leveraging dozens of peer-reviewed climate model projections,” stated Diana Leonard.

LIVING WATER SMART IN BRITISH COLUMBIA: “A good idea is immediate, but preparation for implementation can take 5 to 10 years. Change will then take place quickly. It has taken patience and consistent messaging over the past decade to incrementally build consensus, facilitate a culture change, and start implementing a new way of doing business,” stated Glen Brown when announced release of Beyond the Guidebook 2010 at the UBCM Annual Convention, at a study session for elected representatives

“In 2005, we said this would be a different kind of guidebook. We said that the Guidebook would be the ‘telling of the stories’ of how change is being implemented on-the-ground in BC. Before the chapters could be written, however, the regional case studies had to run their course. Five years later, Beyond the Guidebook 2010 is the story of how we got to here and where we are going next. If one goes back 10 years, there was a void of policy and legislation. This led us down an educational path as the logical alternative. We took the Stormwater Planning Guidebook, which is a document released in 2002, and we moved it to implementation,” stated Glen Brown.

THE WATER CYCLE IS OUT OF BALANCE: “While climate change is causing bigger and bigger storms, our alterations to the environment – especially to the ground surface – have been one of the major causes of the increased frequency of flooding events in modern times,” stated Professor Roland Ennos, University of Hull, when commenting on flood consequences in the United Kingdom (2015)

“In the last few years I have also worked on the environmental benefits of trees in urban areas, and their role in climate-proofing our cities. We have been investigating how the cooling, shading and flood-prevention benefits they provide are affected by the species of tree and the growing conditions. All this will help us appreciate the importance of man’s long relationship with trees and with the wood they produce,” stated Roland Ennos. “To determine whether the humble tree really can provide such robust defences, we first need to understand the role they play in soaking up excess rain water,”

CLIMATE ADAPTATION THROUGH GOOD PLANNING: “Singapore is at the forefront of nearly all countries that have formulated a long-term plan for managing climate change and is steadfastly implementing that plan,” stated Peter Joo Hee Ng, Chief Executive Officer at PUB, Singapore’s National Water Agency (November 2021)

“Singapore is one of most densely populated countries in the world. It faces the twin challenges of ensuring sustainable water supply during droughts as well as effective drainage during intense rain seasons amid climate change. For over two decades, Singapore’s National Water Agency, PUB, has successfully added large-scale nationwide rainwater harvesting, used water collection, treatment and reuse, and seawater desalination to its portfolio of conventional water sources, so the nation-state can achieve long-term water sustainability,” stated Peter Joo Hee Ng.

THE ERA OF WEATHER EXTREMES IS UPON US: “It’s less usual to see an atmospheric river penetrate right past the southern tip of Vancouver Island … and then into the Fraser Valley, going as deep in as in the Fraser Valley, and we saw this one,” stated Charles Curry, Pacific Climate Impacts Consortium after British Columbia was battered by a record-breaking rainstorm (November 2021)

“Our work is the first to directly investigate the impact of these ‘rivers in the sky’ on ‘rivers on the land’ using climate model projections. Focusing on the Fraser River Basin, Canada’s largest Pacific watershed, and using a business-as-usual industrial emissions scenario, we show that the basin transitions from one where peak flow results from spring snowmelt to one where peak flow is often caused by extreme rainfall,” stated Charles Curry. “What the models tell us is sort of an overview or a kind of a probability of these events getting more frequent in the future. But we just can’t say so much about the exact timing of when they’re going to occur.”

LIVING WATER SMART IN BRITISH COLUMBIA: “Many readers tell us that they are inspired by the stories that we share,” stated Kim Stephens, Waterbucket eNews Editor and Executive Director, Partnership for Water Sustainability in British Columbia (June 2021)

“Each week, from September through June, we celebrate the leadership of individuals and organizations who are guided by the vision for Living Water Smart, British Columbia’s Water Plan. Feature stories published weekly on Waterbucket eNews constitute a legacy resource. To make them readily accessible and sharable, many of these stories are now downloadable as report-style documents. In the Living Water Smart Series, featured authors explore specific themes, with an objective of helping others make a difference in the communities in which they live,” stated Kim Stephens.

LIVING WATER SMART IN BRITISH COLUMBIA: “We will be successful when community development is guided by a vision that  embraces ‘design with nature’ approaches to reconnect people, land, fish, and water in altered landscapes,” stated Peter Law, a Founding Director of the Partnership for Water Sustainability, when he provided context for the Partnership’s Living Water Smart Series (May 2021)

“Released in 2008, Living Water Smart was the provincial government’s call to action, and to this day transcends governments. With Living Water Smart as its starting point, the Partnership has a primary goal, to build bridges of understanding and pass the baton from the past to the present and future. The Living Water Smart Series is an integral part of the knowledge-transfer process. In the Series, featured authors explore specific themes, with an objective of connecting dots. The Partnership goal is to facilitate understanding of how to build greener communities and adapt to a changing climate,” stated Peter Law.