Restoring the Water Balance: What happens on the land matters!

Sitelines magazine is a publication of the British Columbia Society of Landscape Architects (BCSLA). Published bi-monthly, BCSLA has a longstanding practice of inviting partner organizations to take on a co-editor role and provide the content for an issue featuring the partner.

The June 2016 issue featured the Partnership for Water Sustainability in BC. This allowed the Partnership to showcase initiatives and tools. Reproduced below is the article co-authored by Kim Stephens and Peter Law.

Land Development and Watershed Protection can be Compatible

“The Partnership for Water Sustainability in BC shares responsibility with government for the Water Sustainability Action Plan for BC, released in 2004. The Action Plan created a partnership umbrella for aligning actions at three scales – provincial, regional and local. The approach is ‘top-down and bottom-up’. The centrepiece is the Water Balance Model family of online tools (www.waterbalance.ca). These were developed as an extension of Stormwater Planning: A Guidebook for BC, released in 2002 (Guidebook). They are unique in the world,” wrote Kim Stephens and Peter Law.

Kim Stephens is the Partnership’s Executive Director. Peter Law is a Founding Director. Prior to retiring from government, he was with the Ministry of Environment on Vancouver Island. During the period 2000-2002, he was Chair of the inter-governmental Steering Committee that developed the Guidebook.

Download In this issue, the Partnership for Water Sustainability in BC presents WATER BALANCE PATHWAY TO A WATER-RESILIENT FUTURE, June 2016, to read the complete set of 9 articles published in Sitelines Magazine.

“The Action Plan’s success helped to lay the groundwork for two provincial initiatives in 2008 – Living Water Smart and Green Communities. They constituted a call to action by the Province to live water smart and build greener communities in order to prepare BC residents for a changing climate. They also established expectations vis-à-vis protecting and/or restoring the water balance.”

“The Partnership for Water Sustainability brings together, and supports the efforts of, local and regional governments across BC. Its overarching goal is to provide tools to help organizations achieve their water sustainability goals, and opportunities for shared learning. Launched in 2012, the Georgia Basin Inter-Regional Educational Initiative (IREI) is an outstanding example of this shared learning approach, and is endorsed by 5 Regional Boards representing 75% of the population in BC (Nanaimo, Capital, Cowichan Valley, Comox Valley, Metro Vancouver).”

“The ‘salmon crisis’ of the 1990s followed loss of small stream habitat in rapidly urbanizing areas. The Province of BC’s response included the Fish Protection Act (1997) and the Guidebook (2002). BC was the first jurisdiction in North America to adopt the Water Balance Methodology. The Guidebook:

“Beyond the Guidebook 2015: Moving Towards “Sustainable Watershed Systems, through Asset Management” is an IREI deliverable and third in a series that builds on the Guidebook foundation. It has initiated the branding of ‘watersheds as infrastructure assets’.”

“In 2002, the Guidebook transformed conventional wisdom with the premise that land development and watershed protection can be compatible. This breakthrough resulted f

rom application of science-based understanding to mitigate seasonal changes in the Water Balance. A decade and a half later, Beyond the Guidebook 2015 is similarly transformational with its premise that protecting Water Balance Services saves communities money and restores aquatic habitats!”

“The Living Water Smart vision is to move beyond traditional infrastructure asset management and also account for nature’s Water Balance services. In 2014, three provincial game-changers came to fruition. The three are mutually reinforcing. They enable implementation of actions by local governments to protect and/or restore the natural pathways by which rainfall reaches streams. Over time, this would achieve the goal of redistributing the seasonal water balance to restore hydrologic integrity in urban areas where local government regulates land use.”

Dawn of a New Era

“Sustainable Service Delivery is the ‘New Paradigm’. It is the singular aim. Asset Management is the means to achieve the aim. BC is at the dawn of a new era for local governments in terms of how communities service urbanizing and redeveloping areas, and define how infrastructure is planned, financed, implemented and maintained.”

“By 2017, an IREI program goal is that all local governments would understand how to achieve Sustainable Watershed Systems, through Asset Management,” concluded Kim Stephens and Peter Law. 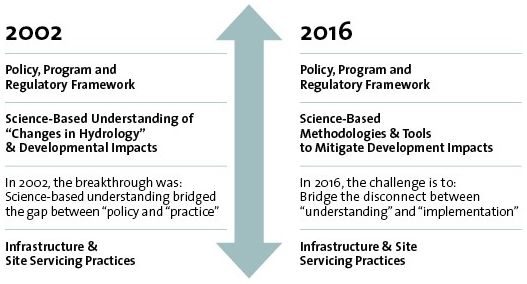 There are persistent challenges for practitioners to adopt, change or evolve practices.