Think and Act like a Watershed (Part 1): Harness Nature to Adapt to a Changing Climate

This is a 4-part series. Part 1 introduces new ecosystem-based adaptation (EbA) research in BC that may inspire a new generation to “think and act like a watershed”. Part 2 will celebrate the 20th anniversary of publication of the seminal research by Richard Horner and Chris May, University of Washington. Part 3 will showcase the results of recent rain garden research by Jennifer McIntyre at Washington State University. Part 4 will conclude with the parallel journeys of Washington State and British Columbia and how the Water Balance Methodology is the foundation for an ecosystem-based approach to protection of hydrologic integrity, and hence creek system resilience.

1st in a series connecting past and current research 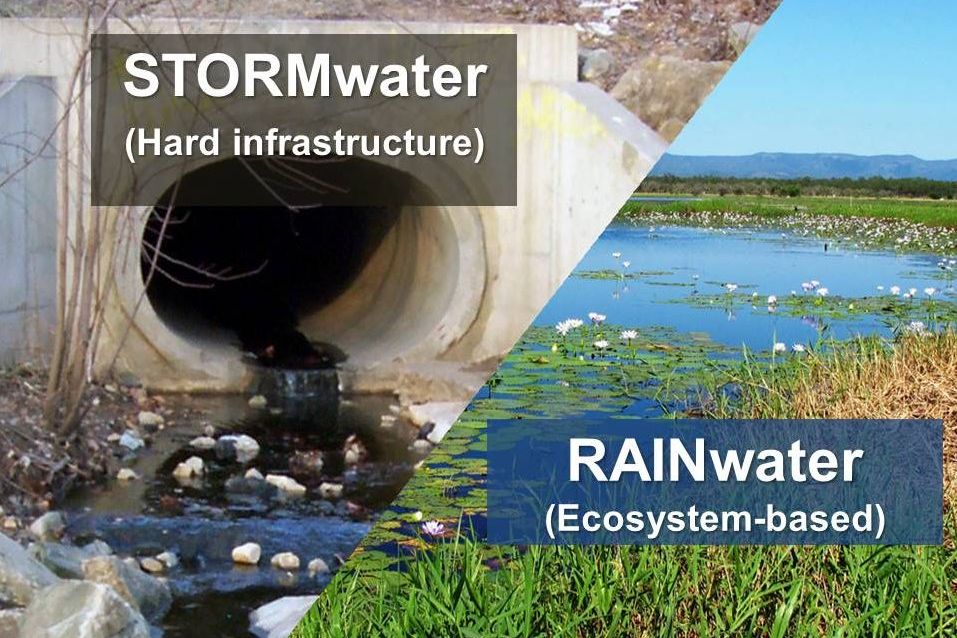 A Combination of Concepts

Fast-forward to May 2016. At a meeting of the Metro Vancouver Stormwater Interagency Liaison Group (SILG), a forum for local government representatives, Julia Berry presented the findings from her Master’s thesis. A graduate of the School of Resource and Environmental Management, Simon Fraser University (SFU), Julia Berry applied original thinking to apply core concepts and produce:

The presentation was arranged by Kim Stephens, co-supervisor on the thesis committee for Julia Berry’s project. He is the Executive Director, Partnership for Water Sustainability in British Columbia. 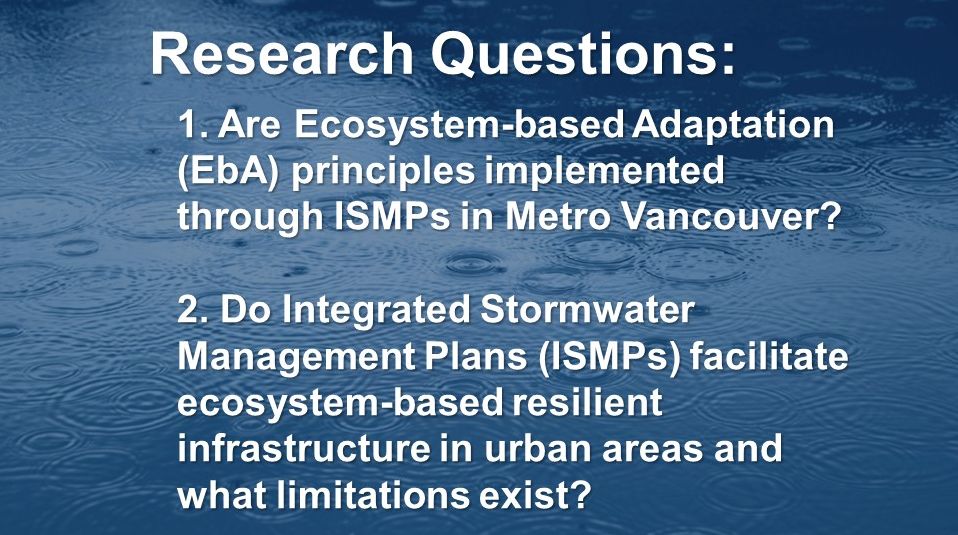 “In 2002, the Government of British Columbia (BC) updated traditional stormwater management regulation with the holistic approach outlined in the Guidebook. The ISMP guidelines cite the threats from climate change to aging stormwater infrastructure as one of many rationales for integrating land use planning and stormwater management.”

“The result of integrating land use planning and rainwater-stormwater management through ISMPs (also known as Watershed Blueprints or Integrated Watershed Management Plans) may provide an opportunity to integrate ecosystem-based solutions to climate change into ecologically focused rainwater management plans.” 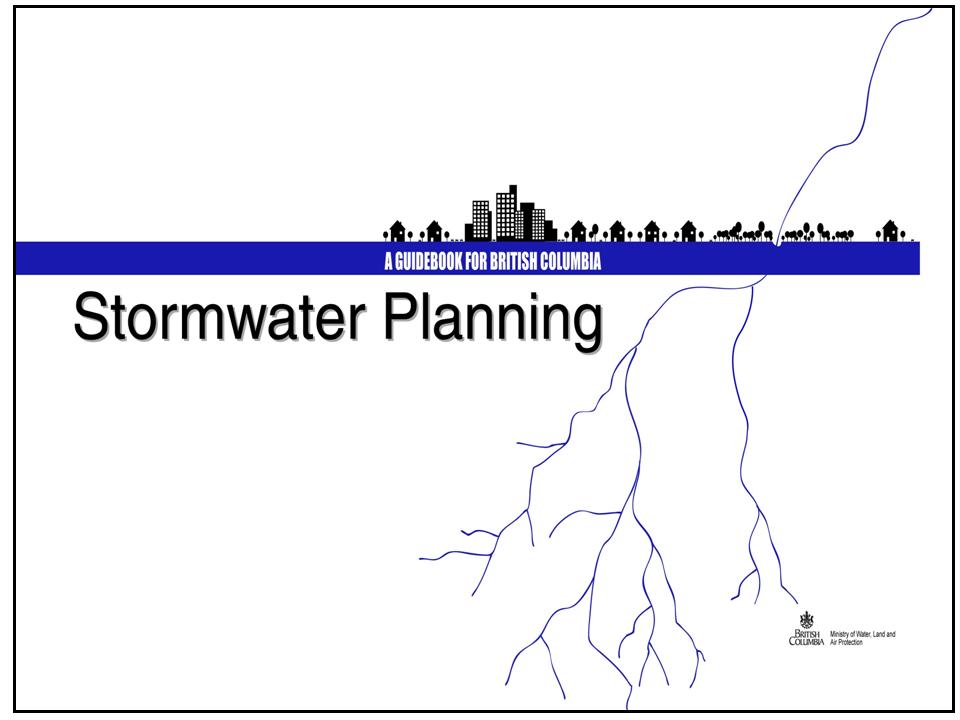 “Ecosystem-based adaptation (EbA) is a novel approach to planning and adaptation that prioritizes ecosystem services, enhancing biodiversity, as well as human health and wellbeing,” continues Julia Berry. “My research uses a framework of EbA principles to evaluate select watershed plans from the cities of Surrey and Coquitlam in the Metro Vancouver region.”

“The case studies evaluated in this projected were decided through the initial interview process and literature review,” explains Julia Berry. “Metro Vancouver was selected as the region for the study because ISMPs are legislated for all member municipalities.”

“The City of Surrey and the City of Coquitlam were selected as case cities during the initial expert interview process. They were selected because both cities have complete and successfully implemented ISMPs, both cities are recognized as regional champions of the ISMP process, and both cities were willing to participate in the study.”

“While the process for developing ISMPs is place-based and is aimed at attaining desired outcomes as opposed to specific practices, the inclusion of EbA principles will also inherently be place-based and likely be reflective of the culture and development requirements of particular municipalities,” concludes Julia Berry. 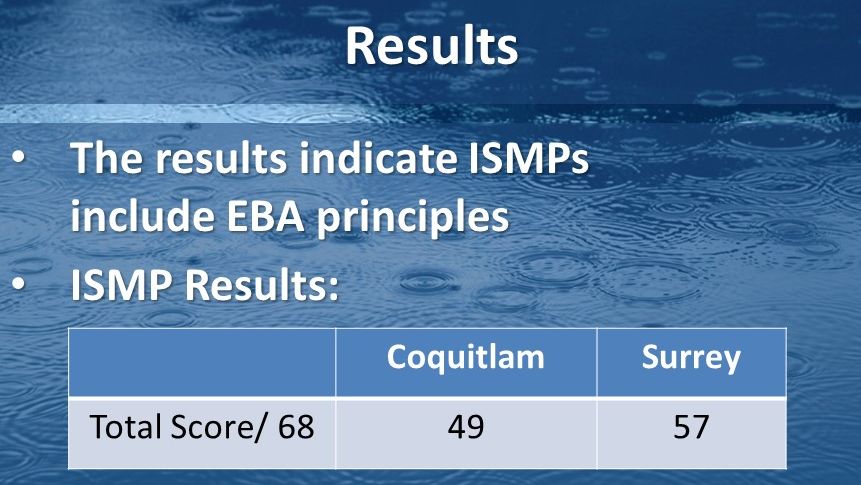 A City of Coquitlam Perspective

“I am a convert,” stated Melony Burton, City of Coquitlam, after Julia Berry concluded her presentation. Melony is SILG Chair and is the City’s Supervisor, Infrastructure

“Julia’s work demonstrates how changing climate effects such as increases in the frequency and volume of rainfall in the winter or drier hotter, summers are significant influencing factors which should be considered along with land use, engineered drainage systems and the environment when developing ISMP’s.  As such, the regional stormwater committee will be considering how to integrate ecosystem-based adaptations for climate change into an upcoming revision of the ISMP template.” 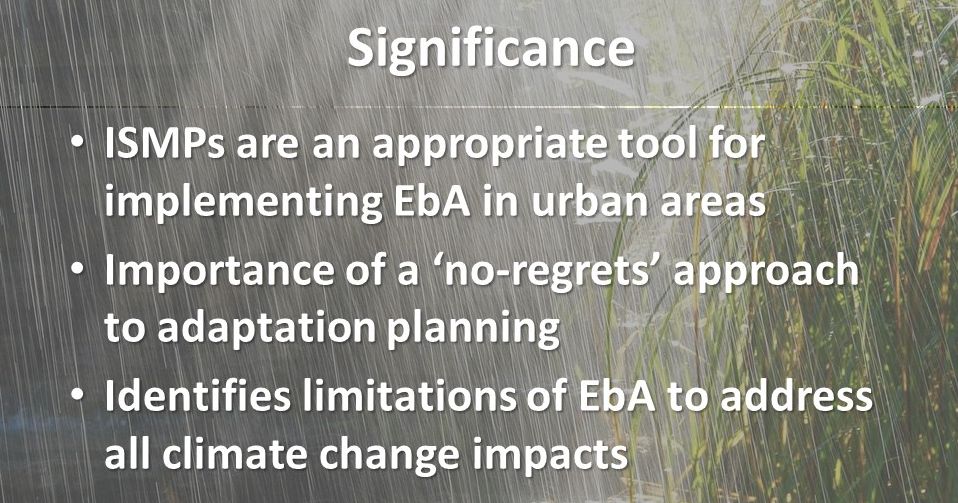 “The research by Julia Berry provides rainwater and adaptation planners with an overview of EbA from principles to practice in British Columbia. The evaluation framework developed by Julia Berry can be used to assess and score the extent to which provincial, regional or municipal documents incorporate EbA principles. The value of her work is that it connects current research to past approaches that have been fallow for more than a decade,” concludes Kim Stephens.