Towards Watershed Sustainability: Align with Provincial Policy & Regulatory Framework / Enable Action by Decision Makers at Local Level (to learn Why and How, read Part B – Beyond the Guidebook 2015)

Structured in four parts, ‘Beyond the Guidebook 2015’ meets the information needs of different audiences. Local government case study experience provides guidance for a collaborative approach to developing integrated solutions that are effective and affordable, create a legacy, and achieve three cascading objectives:

The table below presents a concise overview of the four parts. It is followed by a synopsis of the scope of Part B (which elaborates on “provincial drivers” for local government action). 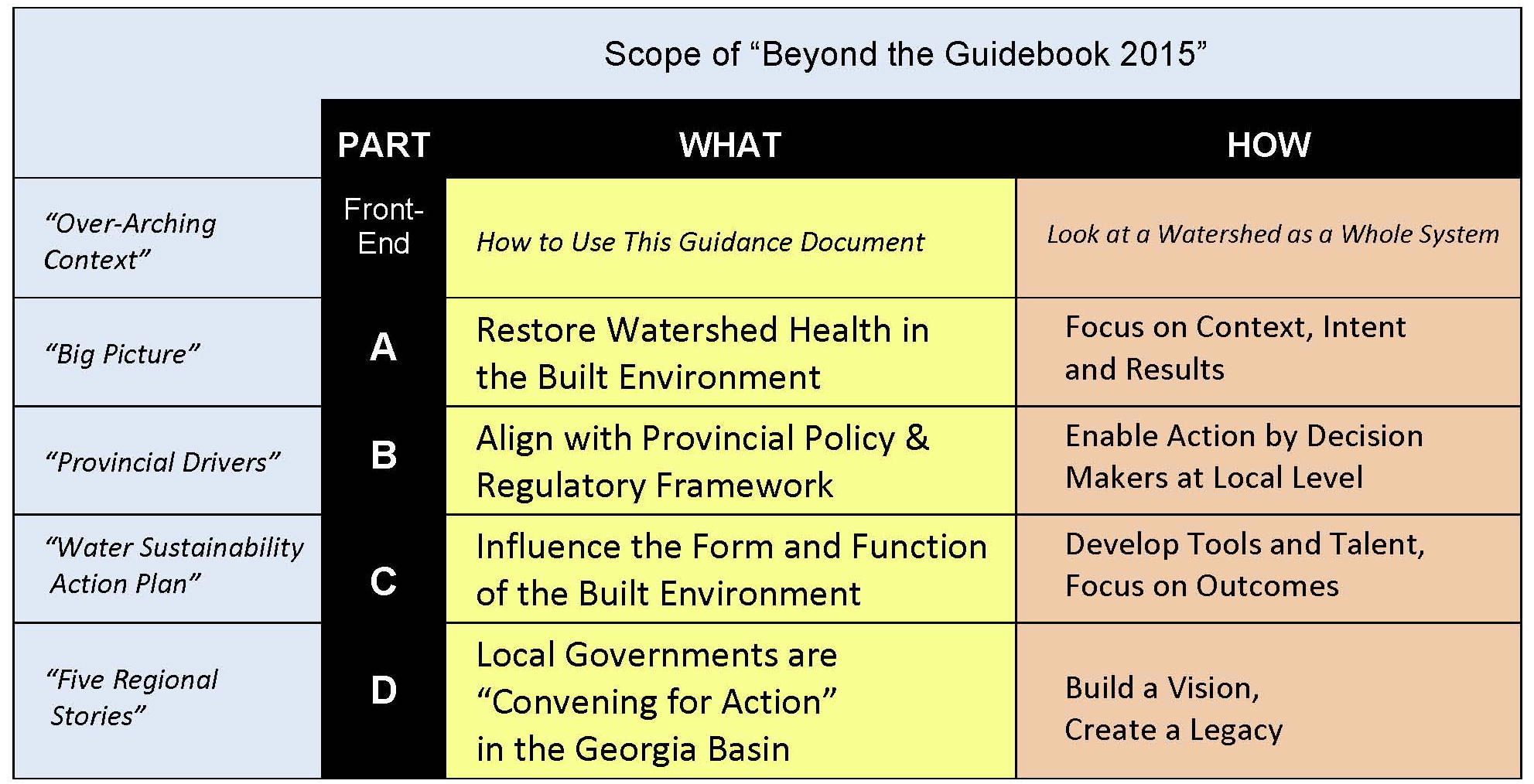 Part B is written for those who wish to understand the regulatory context in BC. It describes provincial drivers for achieving the Watershed Health Goal (i.e. “create a legacy”):

Together, these drivers constitute a policy, program and regulatory framework that enables implementation of watershed-based solutions. But they require integration and coordination to be effective in achieving the Watershed Health Goal.

During the late 1960s, BC began its multi-faceted and ongoing journey towards sustainability. Notable milestone years in this journey are 2003 (‘the teachable year’), 2008 (‘the call to action’) and 2014 (‘the springboard to implementation’). A unifying theme for these three milestone years is build greener communities.

Flying over the Georgia Basin which is comprised of lands and watersheds that surround and drain into the Salish Sea. This inland sea encompasses the Strait of Georgia, Puget Sound and the Strait of Juan de Fuca. Tributary lands include the east coast of Vancouver Island, Metro Vancouver and the Fraser Valley.

“The process that resulted in Beyond the Guidebook 2015 commenced in June 2013. The Capital Regional District hosted the inaugural meeting of the Georgia Basin Inter-Regional Leadership Team, representing five regional districts,” recalls Kim Stephens, Executive Director, Partnership for Water Sustainability in

“Then, in July 2013, a follow-on meeting with provincial government representatives from different divisions within two ministries (Environment and Community Development) helped immeasurably to define a path forward for collaboration

Showcasing the Province’s Story: “Early in the Beyond the Guidebook 2015 process we recognized the need to first align efforts within each of the two scales, that is: provincial and local. With that achieved, we could see that it would then be that much easier to align local actions with provincial policies. This Aha realization was the genesis for the approach that eventually took shape on how to present the Part B content, which is about provincial drivers for action.”

“There is a provincial story. But nobody has been telling it. Or is it more a matter of nobody connecting the dots? Part B of Beyond the Guidebook 2015 is intended to fill that gap. It connects the dots. It does this by linking the landmark initiatives that have been spearheaded by different divisions within different ministries. This should help convey how mandates, roles and responsibilities are aligned to achieve the Watershed Health Goal.”

“Part B is a synthesis of work by provincial government champions that is truly ground-breaking in scope and desired outcome. Part B is in their words. Accomplished through an interview process, the objective in crafting Part B was to be succinct. The challenge to the storytellers was that we would tell each of their stories in two pages maximum, including images.”

Framing the Storyline: “Interview emphasis was on identifying Key Messages – in other words, each  storyteller was asked to be clear on what it is that land and water practitioners really need to take away from each story within Part B. So read the quotable quotes – they are revealing.”

“A breakthrough in how to communicate the Province’s story was framing the progression from teachable year (2003) to call to action (2008) to game-changers (2014). Things don’t just happen. It takes hard work by champions over a long period of time. Also, game-changers that came to fruition in 2014 are the outcomes of adaptive processes, as those leading change have learned by doing and made adjustments along the way.”

Branding the Game-Changers: “We needed a visual to communicate that what happens on the land matters, and to brand the three 2014 game-changers (Water Sustainability Act, Develop with Care 2014, and Asset Management Framework) as a mutually-reinforcing package. Once we had created the visual (image below), we coupled it with the WHAT-SO WHAT-THEN WHAT mind-map to create this storyline:

“Implemented in concert, the three game-changers will enable collaborative and integrated actions by local governments to achieve the Watershed Health Goal.”

A Look Ahead: “Early in the Beyond the Guidebook 2015 process we foresaw that the ultimate driver…for influencing the decisions and actions of local government…would be through Sustainable Service Delivery that provides a higher level-of-service at a reduced level-of-cost.”

“One of the desired outcomes of this type of transformational process is to galvanize additional champions who will both implement needed changes in practice and maintain the watershed health legacy over time. ‘HOW’ everyone works together is as important as ‘WHAT’ everyone works on,” concludes Kim Stephens.

The content in Part B is organized in four short and succinct sections. Scroll down to the image below for a synopsis of each. Note that the first section establishes context for the three sections that follow. The title, What Happens on the Land Matters, is itself an over-arching message.

Provincial Drivers for Action: Also, the essence of Part B is distilled into the three “sound-bites” listed below. These provide a “logic framework” for action. Simply put, they represent what is at stake during an era of instability and they describe what communities must do in order to achieve resiliency:

The provincial government has developed a policy, regulatory and program framework that responds to the above. Developed over many years, three landmark initiatives came to fruition in 2014 (Water Sustainability Act, Develop with Care 2014, and Asset Management Framework). All embody the enabling philosophy. They are drivers for action.

Coordination & Integration: Together the three landmark initiatives provide a platform for integrated and coordinated actions that would enable local governments to achieve Sustainable Watershed Systems, through Asset Management. Each initiative is described in a stand-alone section, yet the three are mutually reinforcing.