Beyond the Guidebook 2015: The Shifting Baseline Syndrome is….

The Shifting Baseline Syndrome: Daniel Pauly, French-born marine biologist and professor at the University of British Columbia, is well-known for his work in studying impacts on global fisheries. In 1995, he coined the phrase SHIFTING BASELINE SYNDROME to describe his observation that:

“Each generation of fisheries scientists accepts as a baseline that the stock size and species composition that occurred at the beginning of their careers, and uses this to evaluate changes…The result obviously is a gradual shift of the baseline…and inappropriate reference points.”

The concept of “Shifting Baselines” has relevance in helping to understand why drivers for “Resilient Rainwater Management” differ across Canada’s diverse landscapes. A backgrounder has been prepared to help inform knowledge-sharing. To download a PDF copy, click on Creating the Future in British Columbia: Recognize and Address the “Shifting Baseline”. 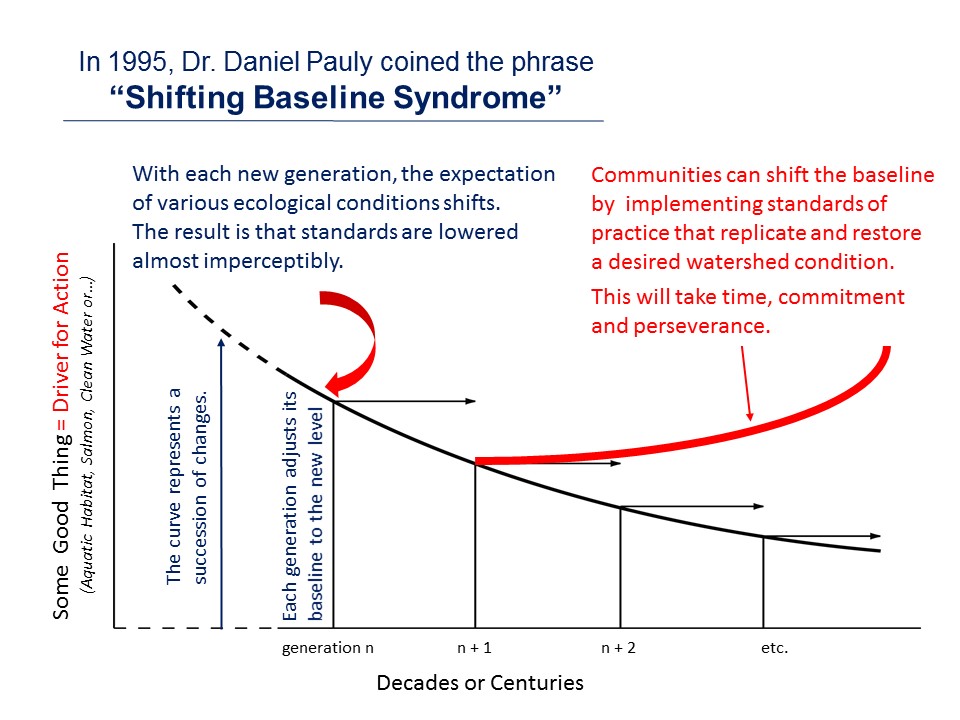 To view Daniel Pauly tell the story of how he came to coin the phrase “Shifting Baseline Syndrome”, visit http://mission-blue.org/2012/03/shifting-baselines-daniel-paulys-ted-talk/

The Shifting Baseline Syndrome is Relevant to All Aspects of Change

Dr. Daniel Pauly developed the concept of the Shifting Baseline Syndrome to describe why each new generation lacks direct knowledge of the historical condition of the environment, and how this lack of understanding plays out as a ‘failure to notice change’.

The figure above is an adaptation of the image created by Daniel Pauly to illustrate the Shifting Baseline concept. Over time, and without a ‘teachable moment’ to raise awareness of a change, the net effect of a community’s failure to notice change is an incremental and typically imperceptible eroding of standards and expectations.

Awareness of shifting baselines in BC has been reflected in a number of landmark processes, including the Agricultural Land Reserve Act (1972), Fish Protection Act (1997) and Water Sustainability Act (2014).

Dr. Pauly developed the concept in reference to fisheries management in a one-page paper titled Anecdotes and the shifting baseline syndrome of fisheries, published in 1995.

“It’s one of my most cited papers, though it’s a very short piece. It’s like a thinking piece; it has no numbers, no equations,” stated Daniel Pauly in a 2010 TED Talk. “We transform the world, but we don’t remember it. We adjust our baseline to the new level, and we don’t recall what was there.”

Communities can shift the ecological baseline upwards; they can replicate a desired watershed condition. This requires commitment and time.

Through a ‘regional team approach’ that cuts across boundaries, disciplines and sectors….. local governments and partners can implement watershed-based solutions that create a legacy.

In 2014, two landmark developments provided local governments with a fresh impetus to reconcile the Shifting Baseline Syndrome and do business differently:

Accepted ‘standards of practice’ – especially those for engineering, planning and finance – influence the form and function of the Built Environment. The goal of shifting to an ecologically functioning and resilient baseline and creating a watershed legacy will ultimately depend on the nature of change to standards of practice and changing to nature.

Creating the Future in British Columbia: Recognize and Address the “Shifting Baseline”

To view the 2010 TED Talk featuring Daniel Pauly, click on the image below.

TO VIEW VIDEO, GO TO: http://mission-blue.org/2012/03/shifting-baselines-daniel-paulys-ted-talk/