October 13, 2014 - Posted in Board of Directors, Partnership Leadership

The BC Public Service Hall of Excellence was established to recognize those individuals who have made exceptional and lasting contributions to the province of British Columbia.

The recipients are determined as part of the Premier’s Innovation and Excellence Awards, a program that has recognized public service achievements since 2004. Beginning in 2014, recipients of the Legacy award are also welcomed into the Hall of Excellence – the highest form of recognition that the BC Public Service can extend to its employees.

The inaugural induction of the Hall of Excellence took place at the provincial Premier’s Awards ceremony in Victoria on October 8, 2014, where Premier Christy Clark recognized both the 2014 recipients and past recipients of the Legacy award.

Ted van der Gulik, President of the Partnership for Water Sustainability in British Columbia, received the 2014 Legacy Award for his career accomplishments with the Ministry of Agriculture. 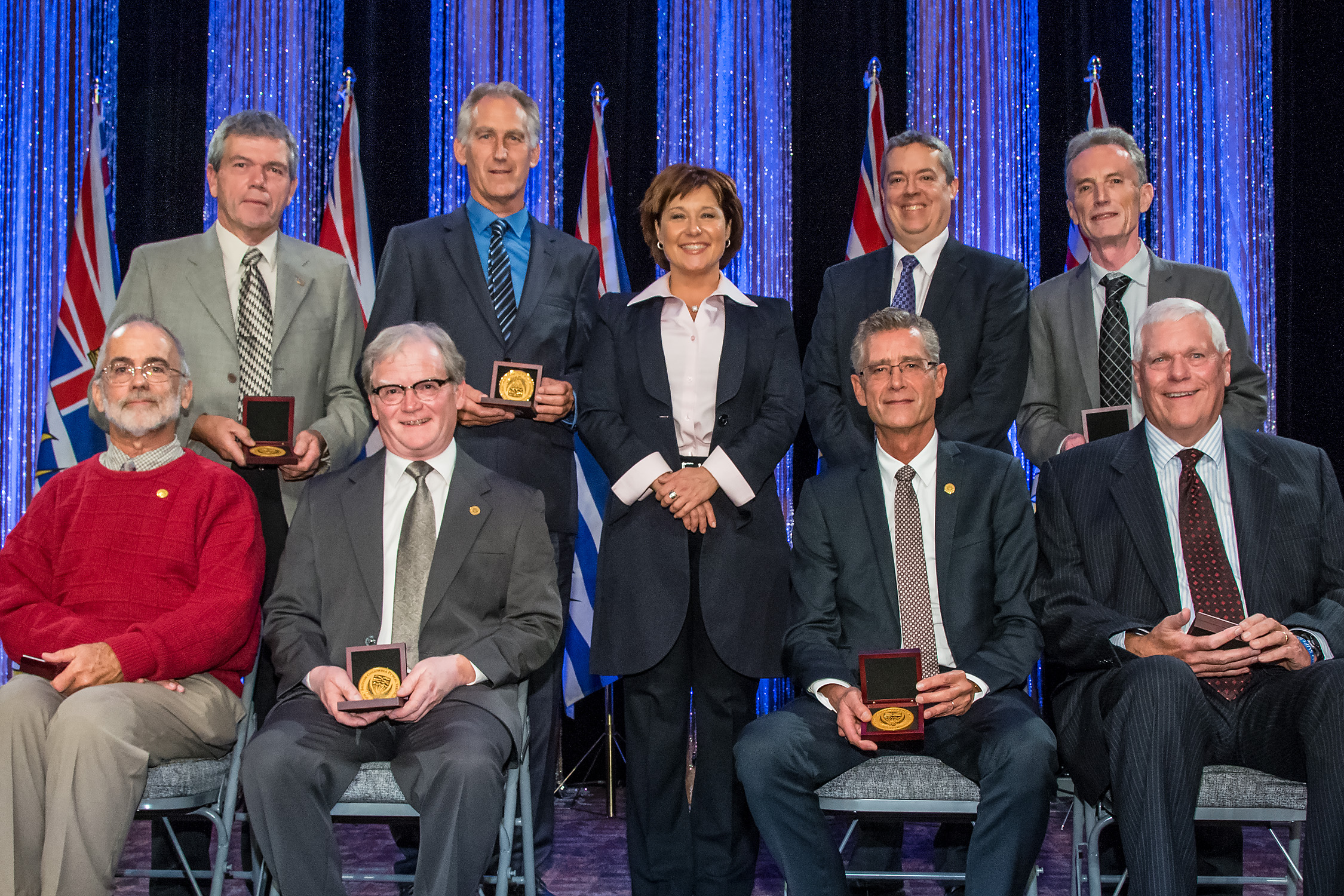 Premier Christy Clark celebrated the exceptional accomplishments of British Columbia’s public service employees and unveiled a new form of recognition, the BC Public Service Hall of Excellence, at the Premier’s Annual Innovation and Excellence Awards ceremony.

“This event marks the 10th year we have been recognizing and celebrating public service achievements that have made real differences in people’s lives,” said Premier Christy Clark. “I wanted to find a special way to honour individuals who have made exceptional and lasting contributions to British Columbia. Now the Hall of Excellence is the highest form of recognition public service employees can strive for.”

Ted van der Gulik is a “water champion” and passionate about ensuring B.C.’s water resources are protected for future generations. In his 35-year career with the Ministry of Agriculture, Ted consistently translated vision into action and built an international reputation for leading-edge work in agricultural water management.

Ted van der Gulik is a visionary and an innovator. He speaks with conviction and makes things happen. He is the epitome of the old adage: if you want something done, ask a busy person. Ted’s bold vision and leadership make him one-of-a-kind.

His lasting legacy is represented by two game-changing tools: the Agricultural Water Demand Model and the Water Balance Model.

The Agricultural Water Demand Model helps the agricultural sector be more diligent in water use, plan for future water needs and establish water reserves. Although it was originally developed for the Okanagan, it is now being implemented provincewide. Ted was also key in convening the water working group of the B.C. Agriculture council with the Ministry of Environment to help support the development of the Water Sustainability Act – just one of the ways his contributions go beyond agriculture and encompass integrated watershed planning initiatives.

The numerous water projects Ted has led have had a lasting impact on entire watersheds and communities in B.C.

His accomplishments have been many, including Premier’s Awards for Water Balance Model and Agriculture Water Demand Model.

His contributions go beyond agriculture and encompass integrated watershed planning initiatives. Ted’s leadership in water conservation and innovative water sustainability practices demonstrates his ability to habitually provide strategic vision and encourage different disciplines to work towards a common goal. Through his adoption of state‐of‐the‐art irrigation practices, combined with countless achievements in agriculture over his 35 years of public service, Ted is well established as a true leader in managing B.C.’s water resources.

Reflections on Making a Difference

“What I enjoyed most about working in the BC Public Service was being able to make a difference,” stated Ted van der Gulik when he reflected on what the Legacy Award means to him. “The opportunity and ability to obtain a tremendous amount of knowledge and expertise and then being able to transfer this knowledge to the agriculture sector and others working in water management was very rewarding.”

To view a 2-minute video about Ted van der Gulik that the Province of British Columbia has posted on YouTube, click on the image below.

To view an 8-minute video of the Awards Ceremony, including the acceptance speech by Ted van der Gulik, click on
https://drive.google.com/file/d/0BwQqliNTkZWxX2I5Q1VfMXY5V0k/view

To read a summary of Ted’s career accomplishments that is posted on the BC Public Service Hall of Excellence, click on Ted van der Gulik.

To download a copy of the news release issued by the Ofice of the Premier, click on Premier honours public service achievements, unveils Hall of Excellence