The British Columbia Drought and Water Scarcity Response Plan focuses primarily on hydrological drought and water scarcity response: the actions taken preceding, during and immediately following a hydrological drought to reduce its impacts. It will assist with ensuring water needs for people and aquatic ecosystems are met in times of drought  and water scarcity. Originally developed in 20o4, it has been updated several times, with 2021 being the most recent.

The following article provides historical context for BC’s plan. The article connects the dots to the 2003 “teachable year” which set in motion decisions, actions and outcomes which continue to ripple through time.

Floods Affect Some of Us / Droughts Affect All of Us

“In British Columbia, we measure our droughts in months – with the range being three to six months. Memories are short, and we are easily lulled into complacency. That is why it is timely that the provincial government reminds us of the importance of a Drought Response Plan, even when people live in a rain forest,” stated Kim Stephens, Executive Director, Partnership for Water Sustainability in British Columbia.

In 2005, at the Water OUT = Water IN workshop co-hosted by the Province and the Partnership, Robert Hicks of the Metro Vancouver Regional District explained that: “Climate change is not a driver; rather, it is a variable. Furthermore, climate change is only one factor to consider when we talk about sustainable infrastructure and sustainable water supply. The real issues are uncertainty and risk, more specifically how we deal with the first and manage the latter.”

Download a copy of Living Water Smart in British Columbia: Dealing with Uncertainty and Managing Risk.

Flashback to the 2004 Penticton Drought Forum

“In 2003, British Columbia experienced one ‘teachable moment’ after another, highlighted by the Okanagan forest fires that resulted in mass evacuations and widespread destruction in the City of Kelowna and surrounding areas. The impact of this ‘teachable year’ was to set in motion a series of outcomes that have rippled through time,” continues Kim Stephens

“First came the Water Sustainability Action Plan, released in February 2004. Then came release of British Columbia’s Drought Response Plan in June 2004. This was followed by the Provincial Drought Forum held in July 2004 in Penticton, which was co-hosted by two cabinet ministers – George Abbott, Minister of Sustainable Resource Management (MSRM); and Bill Barisoff, Ministry of Water, Land and Air Protection (WALP).”

“An action item flowing from the Drought Forum was Achieving Water Balance: A Workshop on Dealing with Uncertainty and Managing Risk, held in Penticton in April 2005. The session purpose was to point the way forward to the next paradigm-shift in water supply management. Designed as a technical transfer session, it shone the spotlight on the Water OUT = Water IN way-of-thinking.”

“Drought severity in B.C. has previously been  communicated through four “drought levels”. Because these categories are broad, it makes it difficult to communicate moderate levels of drought, worsening drought conditions over time, or when regions are experiencing abnormal water scarcity,” stated Julia Berardinucci, Director, Water Strategies and Conservation, Water Protection and Sustainability Branch

“Desired outcomes in going to a 6-level system include better understanding of current conditions, advance warning of extreme drought, and better alignment with other jurisdictions in North America. A new ‘severely dry’ level would signify a severe state of drought, and a new ‘exceptionally dry’ level would be used to identify drought conditions that are at or near historical lows.”

“In March 2021, the Province released a proposal to update and expand British Columbia’s (B.C.) drought levels. We received 24 individual comments on the proposal and heard support from the majority of respondents to expand the drought levels to a 6-level scale, align with the North American Drought Monitor best practices, and conduct an operational trial period this summer.”

“Government is now implementing a province-wide operational trial of the proposed drought levels during the spring and summer. An evaluation of the trial will be conducted at the end of this period to determine effectiveness. If the new levels are found beneficial, then they will likely become permanent.”

More information on what government heard and the outcomes of the recent engagement period can be found on the Water Sustainability Act Blog Post #33, in the What We Heard and Outcomes document, and in a short video.

“We are pleased to announce that government is moving forward with a province-wide operational trial of the proposed drought levels during this year’s drought season,” continues George Roman, Manager,  River Forecast Centre and Flood Safety.

“These updates better align the province with North American best practices and include revisions and feedback from public engagements held earlier this year. An evaluation of the drought levels trial will be conducted at the end of the drought season to determine effectiveness. If the new levels are found beneficial, then they will likely become permanent.”

“The B.C. Drought Response Plan was updated to reflect the new drought levels and is now available as the British Columbia Drought and Water Scarcity Response Plan. The Plan was also updated to provide clearer messaging, improved definitions, and include new supplemental drought indicators (such as water temperature and air temperature).”

“This Plan was developed, in part, by drawing from experience with previous droughts, including the summers of 2009 and 2015, both of which saw extremely low flows in many streams, and low groundwater levels in wells across B.C.”

Download a copy of the British Columbia Drought and Water Scarcity Response Plan. 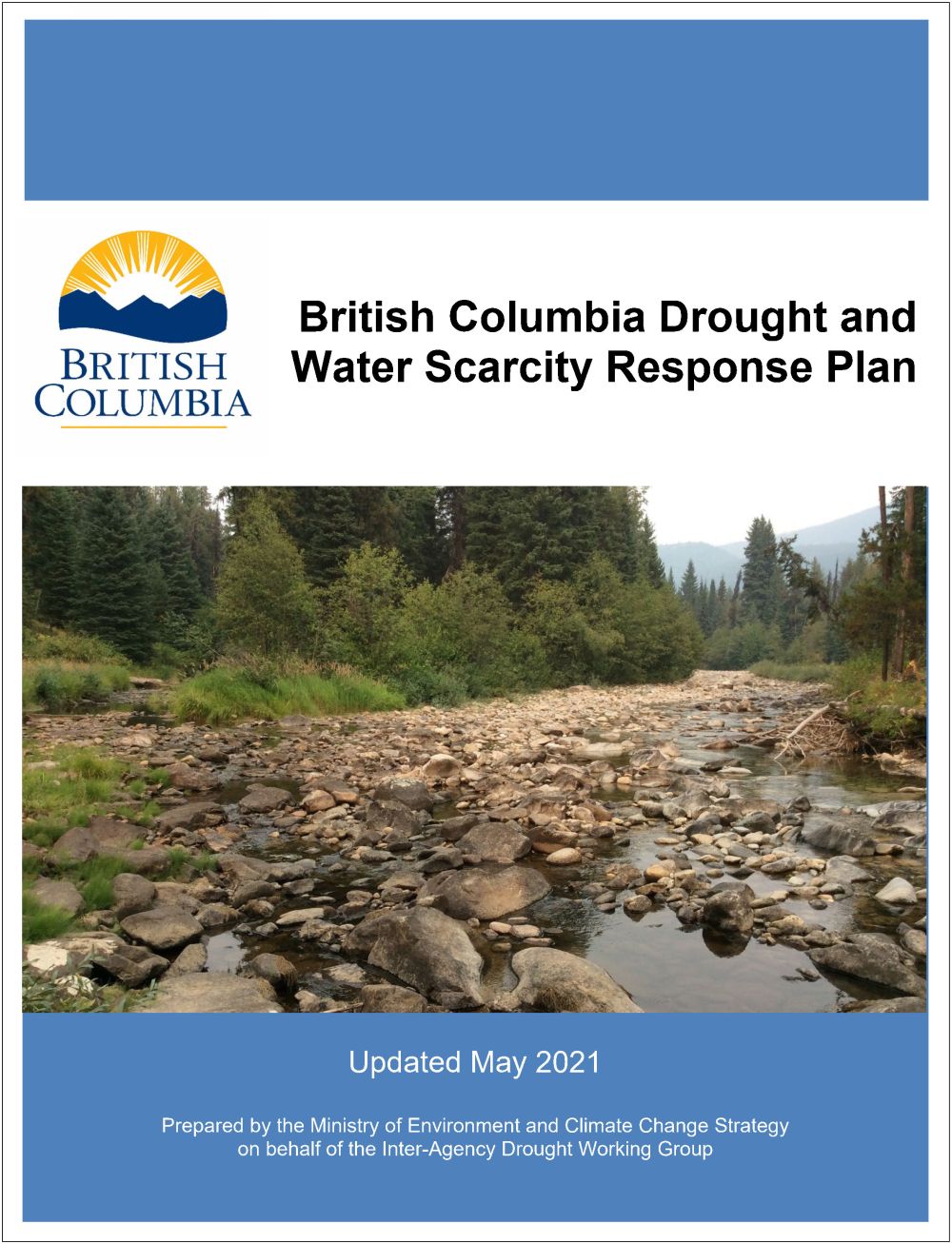