BRITISH COLUMBIA’S NEW CLIMATE REALITY: “While summer drought is very much the new normal for the Cowichan Valley, the warm temperatures and lack of rain we’ve had year-to-date is of significant concern,” said Kate Miller, Manager of Environmental Services, Cowichan Valley Regional District

Vancouver Island is at Drought Level 3

In June, the B.C. government announced a Level 3 drought rating for Vancouver Island and the Gulf Islands. The heightened alert means a call for voluntary water-use reductions for all surface and groundwater users, including farmers, local governments and residents alike.

Cowichan communities experienced generally below normal precipitation and above normal temperatures throughout the late winter and early spring of 2019, leading to concerns about drought conditions throughout the summer.

“While summer drought is very much the new normal for the Cowichan Valley, the warm  temperatures and lack of rain we’ve had year-to-date is of significant concern,” said Kate Miller, Manager of Environmental Services for the Cowichan Valley Regional District. “We can see the low lake and river levels, but data from provincial monitoring wells showing three wells in the Cowichan region at record low levels. This tells us the drought is also affecting groundwater aquifers.

“The new normal is water scarcity, not water abundance, and all actions must flow from this reality. We also need to prepare ourselves for tough conditions and decisions in order to protect our water supply.”

The situation is especially critical in the Cowichan Watershed, as the lack of spring rain led to record low lake levels. Salmon fry salvage that normally takes place mid-summer was already under way in June as lake and river tributaries dried up.

Paper Excellence has received permission to reduce flows through the weir at Lake Cowichan to 4.5 cubic metres per second. Even with these emergency low flows, it is forecast that pumping water over the weir will be needed by early August.

In mid-June, he said that, “We are probably at the stage of things where we would be messaging that conservation is now a key thing.” Campbell sits on the Technical Drought Working Group committee, which sets drought conditions across the province.

Campbell said if heat and low rainfall continue and areas of the province slip into Level 4 drought, the province has authority to restrict water use instead of relying on voluntary reductions. 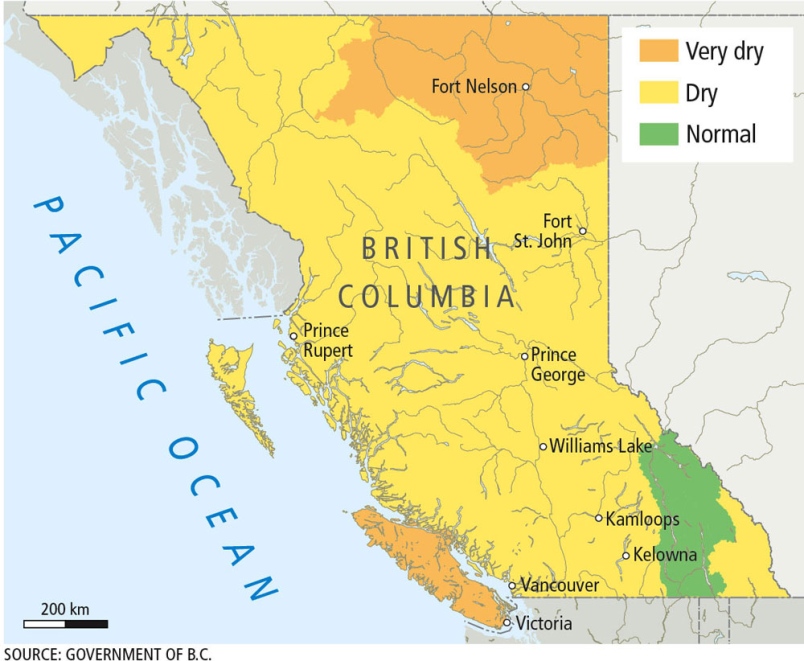