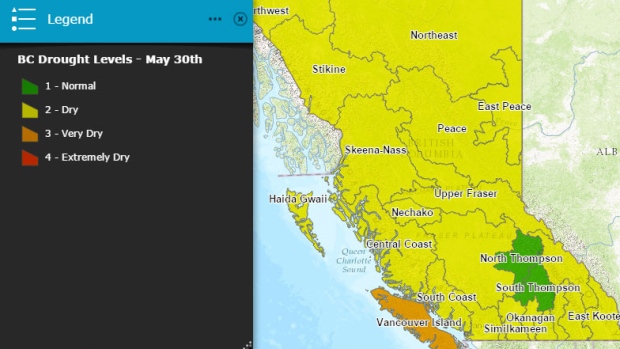 Unless there is significant rain by the end of June, expect another summer of water rationing

Waters levels on parts of Vancouver Island and the Gulf Islands are already so low the province is urging residents to prepare for another summer of drought conditions.

“The region will likely experience significant water supply shortages in 2016 unless there is substantial precipitation between now and the end of June,” said a statement issued by the Ministry of Forests, Lands and Natural Resource Operations on Monday.

The province says most streams and rivers on the islands are experiencing “very low flows,” similar to this time last year.

As a result, all water users — including residents, industry, farmers and municipalities — are being urged to reduce their water consumption by 30 per cent.

B.C. has four levels of drought, with level four being the driest.

Actual water restrictions are generally set by municipal governments based in part on the provincial drought classification system and their own water reservoir levels. Last year many regions banned lawn watering and other water uses because of a level 4 drought.

So far this year the Capital Regional District and some other municipalities only have stage one water restrictions in place, which generally limits the time and days people can water their lawns.

But should conditions reach Level 4, “provincial water managers may exercise their authority to temporarily suspend authorized water usage in affected watersheds and aquifers,” said the statement.

The ministry is also warning low river levels could again put an end to some freshwater fishing this summer.

“I would say the canary in the coal mine, which probably prompted that is the Cowichan River,” said Julie Pisani, Regional District of Nanaimo drinking water and watershed protection program coordinator.

The Cowichan River is at less than 20 per cent of its normal median flow for this time of year. It’s a similar tale for other rivers in the region.

“Even though we had better snow accumulation through the winter, the warm weather has melted the snow that did accumulate … so that translates into stream flows being lower than normal as well,” Pisani said.

See the full map of drought conditions in B.C. 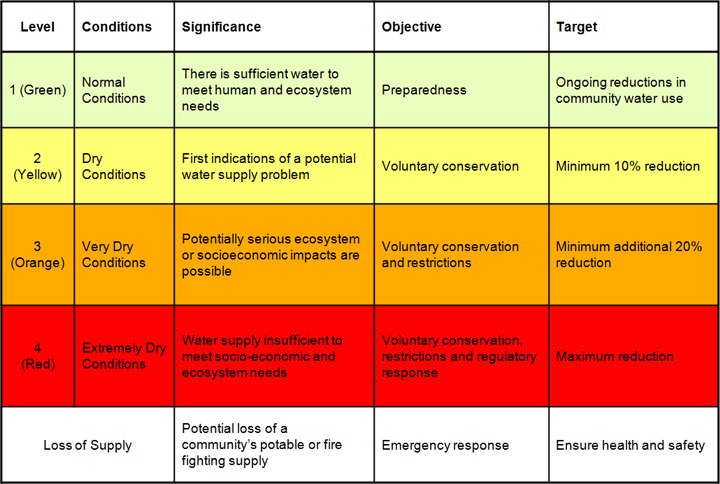