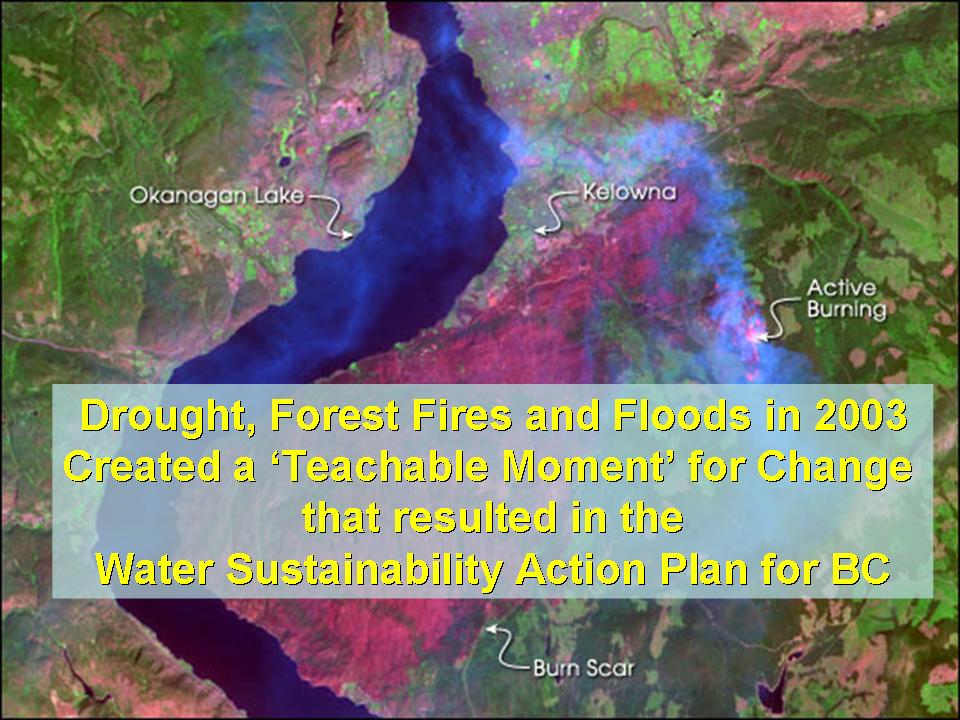 “The year 2003 was a memorable one in British Columbia history,” states Kim Stephens, Executive Director for the Partnership for Water Sustainability for British Columbia. The Partnership is the hub for a ‘convening for action’ network in the local government setting, and is responsible for delivering the Water Sustainability Action Plan for BC through partnerships and collaborative initiatives that align actions at the regional and local scale with provincial policy direction. Kim Stephens has had an ongoing responsibility for development and implementation of Action Plan elements.

and everything that could happen did in fact happen. The summer months were marred by forest fires – who could ever forget the situation around the City of Kelowna in particular when entire neighbourhoods were on fire. The drought and forest fires were followed by record-breaking floods in the October-November period. To round out the big four, the impact of the pine beetle plague was beginning to be felt too.”

Convening for Action at the Penticton Drought Forum

“The drought, forest fires and floods in 2003 provided the backdrop and the context for the Province convening an event in July 2004 that was branded as the Penticton Drought Forum,” continues Kim Stephens.

“The Province’s response to the 2003 drought encompassed a Drought Handbook and a $2M drought planning grant planning program. The rollout of both commenced at the Penticton Forum. Several cabinet ministers participated in the Forum, including George Abbott and John van Dongen. This demonstrated the profile that the provincial government attached to this event.”

The Handbook was updated in 2009. At the time of release, Environment Minister Barry Penner stated that:

“For years, British Columbia has had a reputation for having a plentiful amount of clean water to support our quality of life and keep our ecosystems healthy and vibrant. But water is a finite resource. It is paramount that we learn to carefully manage it so we can keep it healthy and secure for the future.”

“The hot, dry summers of recent years, and 2003 in particular, brought home the message that we shouldn’t take our water supply for granted. We need to change our way of thinking about our valuable water resource to ensure we are protecting water for communities, for economic development and for the sustainability of fish and aquatic ecosystems.”

To download a copy, click on Dealing with Drought: A Handbook for Water Suppliers in British Columbia.

Originally posted in 2004 on the Convening for Action community-of-interest.