Lack of Groundwater Licensing is a Crisis in the Making – What will it to take to motivate businesses, farmers, and others to apply in their own self interest?

In this edition, we feature the groundwater licensing regulation, a foundation piece for successful implementation of BC’s Water Sustainability Act (WSA), passed in 2016. The WSA is once-in-a-generation, transformational legislation. The 6-year transition period for groundwater licensing ends on March 1, 2022. With six months to go, the dilemma is that a mere 1 in 5 small business owners and farmers who rely on groundwater have applied for a licence. In July, the provincial government released this statement of intent: 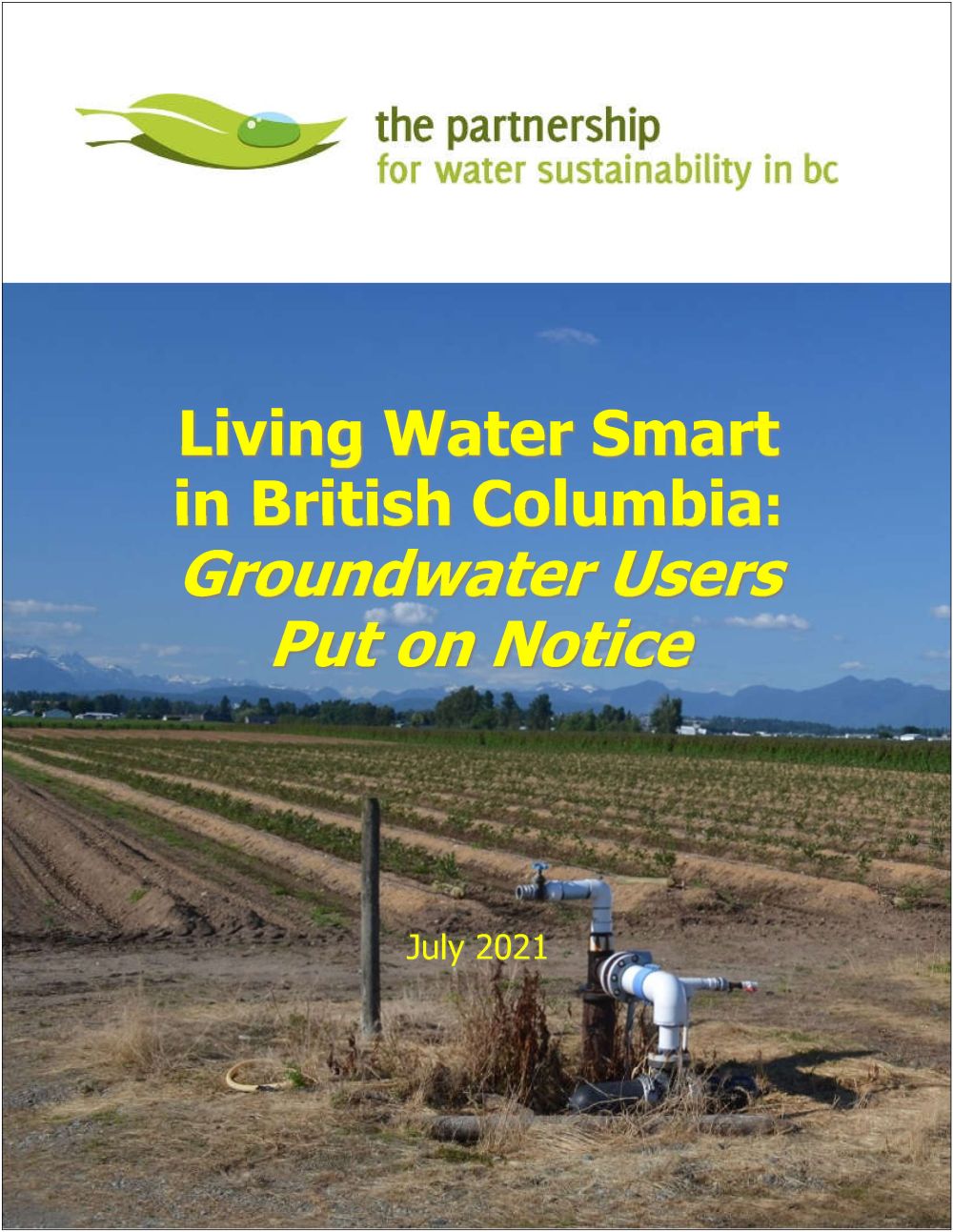 “In April, the writer was part of a water roundtable session convened by the Honourable Nathan Cullen, Minister of State for Lands and Resource Operations. The issue that I highlighted for the Minister was the looming crisis over groundwater licensing implementation. Two weeks later, the Partnership for Water Sustainability released our first Primer titled the Emerging Crisis Around Groundwater Legislation Implementation,” stated Kim Stephens, Waterbucket eNews Editor and Executive Director, Partnership for Water Sustainability in British Columbia.

“The announcement by the provincial government in July prompted the Partnership to create the second Primer titled Groundwater Users Put on Notice. To create a tidal wave of groundwater licence applications, the dire situation calls for leadership plus a VALUED BY ALL ethic, as well as effective communication of consequences followed by enforcement. The Primer is intended to inform the conversation about solutions to the problem.”

“Groundwater Users Put on Notice is about WHAT must happen. The issue is top-of-mind for numerous concerned individuals and organizations. The steady drumbeat calling for action is creating broader awareness that a crisis looms just around the corner. But time is running out. The question of the hour is what happens after March 1, 2022?”

“On September 30, the Partnership will lay out HOW government can make groundwater licensing a reality through a budget line item. As part of the Budget 2022 Consultation process, the Partnership has a window of opportunity to inform the Select Standing Committee on Finance and Government Services about the elements of an Action Plan to get the job done.”

“In the spirit of collaboration, we ALL have a responsibility to communicate in a way that fosters trust, respect, cooperation, and action. This is the moment for leadership from the highest level to demonstrate that the provincial government is implementing the Water Sustainability Act in good faith. It is also a moment for ALL to embrace shared responsibility to ‘get it right’. We invite readers to help spread these messages to groundwater users and government alike.”

In the final year of the 6-year transition period, the biggest groundwater licensing challenge has become convincing historical users that losing their status will have huge consequences for them if they miss t he new law came into force on February 29, 2016.

Groundwater licensing is a rare opportunity to make a difference and thereby make progress in bringing to fruition the Living Water Smart vision for water: Safe, sustainable, valued by all. But workshops, ‘how-to’ sessions for making an application, ads in local papers, mail campaigns, and information bulletins on a government website are clearly not reaching groundwater users.

Sometimes government has difficulty conveying messages in ways that connect with the public. All too often, it seems, something gets lost in translation. Given that a mere 1 in 5 of those who use water for non-household purposes have applied, what will it take to galvanize the remaining16,000 historical users to submit their licence applications to protect their legal access to groundwater?

The Partnership for Water Sustainability is committed to doing its part to get the message out about managing groundwater sustainably for future generations. In September 2021, the  Partnership released its second Primer on groundwater licensing implementation. It is a compendium of very persuasive and informed opinions from people who have expert knowledge and really understand the issue.

This is not a technical report. Because people learn through stories and anecdotes, the Primer storyline is built around quotable quotes by a trio of knowledgeable professionals to tell the “story behind the story”. Ted van der Gulik, Mike Wei and Donna Forsyth had long-term service in government. In Part One, we reproduce the government’s recent Information Bulletin. This is the springboard to Part Two on true risks of not applying for a water licence. In Part Three, the Partnership suggests game-changing solutions.

True Risks of Not Applying for a Licence

“If ‘someone’ does not ‘fix’ the groundwater licensing problem, it will get messy for everyone after March 1, 2022. It seems inevitable that government will be forced to act against unlicenced groundwater use – based on fairness to those who did apply. It will be difficult for government to shut down businesses. However, there are a few scenarios that have already come forward in the past few years that indicate what the future may look like after the March 1, 2022 deadline,” says Ted van der Gulik, formerly with the Ministry of Agriculture and now President of the Partnership for Water Sustainability in BC.

“It is surprising how many small businesses in rural BC, such as roadside restaurants, motels and gas stations, use groundwater. Many are operated by families. These are typically small business operations and owners who are not familiar with all the various government requirements. Many are unaware, and even surprised, to hear of the requirement for groundwater licensing; it’s just not on their radar,” reports Mike Wei, former Deputy Comptroller of Water Rights, Ministry of Environment.

Missing the Deadline Would Mean Shutting Down Businesses

“Since the government made a ‘once in a century’ change to the water law, government needs to ensure that they communicate ALL of the ongoing financial risks to historical businesses and the potential devaluation of their properties, if they miss the deadline. I believe that it is very important to be crystal clear about the impacts of the end of the transition period given how the law is written,” urges Donna Forsyth, retired civil servant. She led the team that developed the new water law under the Water Sustainability Act.

Immediately Ensure New Wells are in Compliance, Learn by Doing, and Adapt the Strategy for Enforcement

“The Partnership concludes that if government would follow through with compliance checking for ‘new’ unauthorized water uses, it would certainly send a message and a wake-up call to ALL water users – especially if accompanied by a concerted education and communication effort,” emphasizes Ted van der Gulik.

“What would the succinct message be? It would be that government intends to systematically check compliance, now and beyond March 1, 2022. Only the Premier has the authority and accountability to direct adequate resources and attention to motivate historical groundwater users to apply before it is too late and to ensure there are equitable groundwater supplies for the future.”

Incorporation of the Partnership for Water Sustainability in British Columbia as a not-for-profit society on November 19, 2010 was a milestone moment. Incorporation signified a bold leap forward. The Partnership evolved from a technical committee in the 1990s, to a “water roundtable” in the first decade of the 2000s, and then to a legal entity. The Partnership has its roots in government – local, provincial, federal.

Application of Experience, Knowledge and Wisdom

The Partnership believes that when each generation is receptive to accepting the inter-generational baton and embracing the wisdom that goes with it, the decisions of successive generations will benefit from and build upon the experience of those who went before them.

The Partnership leadership team brings experience, knowledge, and wisdom – a forceful combination to help collaborators reach their vision, mission, and goals for achieving water sustainability. When they are successful, the Partnership is successful.

The Time Continuum graphic (above) conceptualizes the way of thinking that underpins the inter-generational mission of the Partnership for Water Sustainability.  Influence choices. Capitalize on the REACHABLE and TEACHABLE MOMENTS to influence choices.