Regeneration and Restoration in Action! > Storm Cunningham is coming to British Columbia to inspire audiences to “improve where we live”

Everywhere one turns these days, “re” words appear: urban regeneration; regenerative agriculture; economic revitalization, and so on. Storm Cunningham is a major catalyst in the global “re” trend. Author of three books and publisher of Revitalization: The Journal of Urban, Rural & Environmental Resilience, Storm helps places worldwide revitalize with the assets they have today, to attract the resources they will need tomorrow.

The first event is the Parksville 2019 Symposium in the Regional District of Nanaimo. On the evening of April 3rd at the Parksville Community and Conference Centre, Storm will speak on the topic of “Nature is Regenerative: We should be too”. A key message is that we can create a desired future that would achieve this shared vision: “improve where we live”.

The second event is a week later in the Cowichan Valley Regional District. On April 11th at the next in thePlace-Making Vancouver Island Speakers Series, Storm will speak on the topic of “Revitalizing Communities by Restoring the Environment”. The venue is the Ramada Inn in the City of Duncan.

The Cowichan Valley’s Place-Making Series features local and international speakers who explore different community building topics to inspire residents to continue enhancing and building on the Cowichan identity, and Vancouver Island more broadly, while planning for its future.

Register now to see Storm in action in the Cowichan Valley: 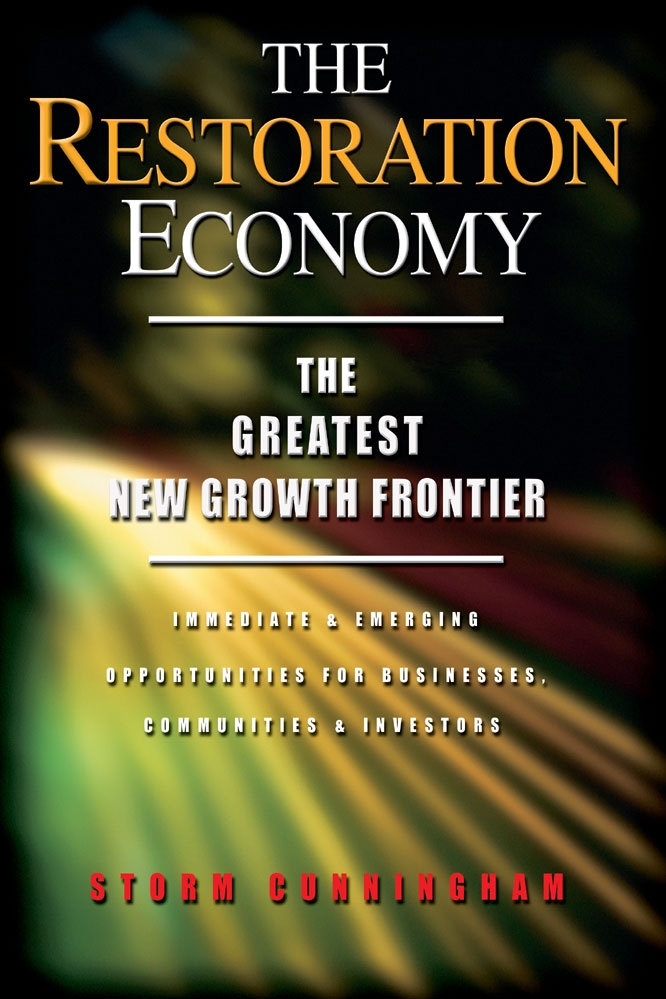 Published in 2002, it was the first book to document the new disciplines and fast-growing industries that are renewing our natural, built, and socioeconomic environments.

“Strategies are our path to success. They become our primary interface with the world. Thus, what we restore, restores us. What we revitalize, revitalizes us.”

“The Restoration Economy introduced the huge and multifaceted industrial opportunity that gave the book its title. It was the first book to encompass restoration of both built and natural environments, documenting the crises, disciplines and industries that lie beneath what I see as a global trend toward renewal,” states Storm Cunningham.

“In reWealth! I make a clear distinction betweendewealth and rewealtheconomies. The first depletes resources, depletes wildlife habitat, degrades the environment, and, in return, yields something called progress. In contrast, a rewealth economy restores all those things, leaving everything better than it was when we found it.”

Improving Where We Live Through Restorative Land Development

So what is the regeneration economy? What is restorative development?

Storm Cunningham’s working definition is that “Restorative development is a mode of economic activity that returns property, structures, or objects to an earlier condition, transforms them into a healthier and/or more functional condition, or replaces an unsalvageable structure without consuming more land.”

Why Restorative Land Development is the ‘New Business As Usual’

“In the late ‘90s, I began noticing a miraculous new trend: a number of places – both ecosystems and communities – were actually getting better, some spectacularly so,” states Storm Cunningham.

“During the last two decades of the twentieth century, we failed to notice a turning point of immense significance. New development – the development mode that has dominated the past three centuries – lost significant ‘market share’ to another mode: restorative development. How could we miss a story like that?

“More importantly, why is it happening? Primarily, it’s because we’ve now developed most of the world that can be developed without destroying some other inherent value or vital function of that property. The major driver of economic growth in the twenty-first century will thus be redeveloping our nations, revitalizing our cities, and rehabilitating and expanding our ecosystems.

“Maturing civilizations stand on three legs: new development (adaptive conquest); maintenance/conservation; and restorative development (adaptive renewal). Dominance periodically shifts from one leg to another, fundamentally altering technology, culture, and commerce. We are now in such a transition.”

Get the Language Right

Storm Cunningham also advocates more rigour in the language used to describe desirable objectives — phrases like smart growth and sustainable development. These, he says are just “warm and fuzzy” phrases that are so imprecise that they don’t mean much.

“People tend to feel good about activities that fly under those flags, but they often aren’t clear on exactly what it is they’re supporting,” observes Storm Cunningham.

“It’s easy to put a solar array on a roof and call the building green. But when you green up an existing property, whether it’s a brownfield site, or a historic building, or an office building or whatever, you’re renovating that building using green technologies, and you’re not offsetting all that wonderful greenness with the consumption of new materials and the disposal of old materials.”

“That’s the real green, the ultimate green,” he concludes.