“We transform the world, but we don’t remember it. We adjust our baseline to the new level, and we don’t recall what was there,” states UBC’s Dr. Daniel Pauly

Starting on October 23 in Calgary and concluding on November 3 in Halifax, the Partnership for Water Sustainability in British Columbia is leading an Across Canada Workshop Series. Funded by the Intact Foundation through the Climate Change Adaptation Project at the University of Waterloo, the series showcases the case study experience of those local governments leading change in BC, with emphasis on the application of Resilient Rainwater Management principles and practices.

RESILIENT RAINWATER MANAGEMENT: Across Canada Workshop Series on Adapting to a Changing Climate

In 1995, Dr. Daniel Pauly of the Fisheries Centre at the University of British Columbia coined the phrase Shifting Baseline Syndrome. This concept is applied to all aspects of change and the failure to notice change. The concept helps to understand why drivers for Resilient Rainwater Management differ across Canada.

To help inform knowledge-sharing via the Across Canada Workshop Series, the Partnership for Water Sustainability in BC has released a ‘backgrounder / op-ed’ titled: Creating the Future in British Columbia: Recognize and Address the Shifting Baseline.

“This results from each new generation lacking knowledge of the historical, and presumably more natural, condition of the environment.  Therefore, each generation defines what is ‘natural’ or ‘normal’ according to current conditions and their personal experiences.”

“With each new generation, the expectations of various ecological conditions shifts.  The result is that standards are lowered almost imperceptibly.”

“We transform the world, but we don’t remember it. We adjust our baseline to the new level, and we don’t recall what was there.”

“Every generation will use the images that they got at the beginning of their conscious lives as a standard and will extrapolate forward. And the difference then, they perceive as a loss. But they don’t perceive what happened before as a loss,” emphasizes Dr. Pauly.

“Yet we can shift the baseline for the better,” adds Ted van der Gulik, Partnership President. We can create a desired future watershed condition. BC’s new Water Sustainability Act provides a new opportunity and framework to collaborate and implement watershed-based solutions in the local government setting.”

To download a copy, click on Creating the Future in British Columbia: Recognize and Address the Shifting Baseline.

To watch the 9-minute TED Talk where Daniel Pauly tells the story of how he came to coin the phrase Shifting Baseline Syndrome, either click on the image or on the link below the image. 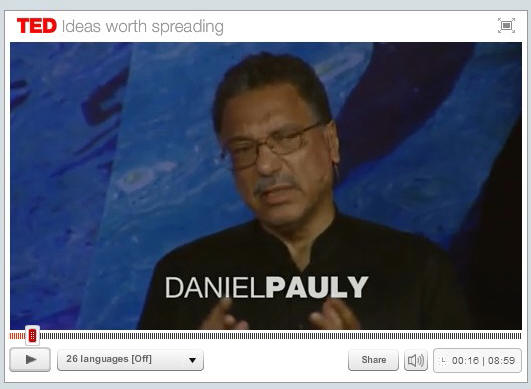