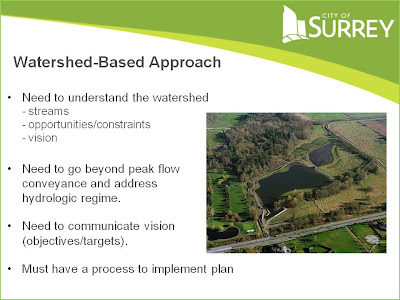 The following story about innovation and leadership in the City of Surrey is extracted from Chapter 7 of Beyond the Guidebook 2010, released in June 2010. This water-centric guidance document tells the stories of how change is being implemented on the ground in BC. To download a copy, click on Beyond the Guidebook 2010: Implementing a New Culture for Urban Watershed Protection and Restoration in British Columbia
When the City of Surrey hosted the second event in the 2006 Showcasing Green Infrastructure Innovation Series, historical context was provided by Paul Ham, Surrey’s General Manager, Engineering. Paul Ham was also Chair of the Green Infrastructure Partnership from 2005-2008. He retired from the City in 2008.

“The East Clayton Neighbourhood Concept Plan provided the first large-scale opportunity to ‘test’ a new approach advocated by Patrick Condon and others. This new approach, which is sometimes characterized as ‘the future is the past’, embodied a design with nature way-of-thinking about drainage,” stated Paul Ham.
The 250-hectare neighbourhood of East Clayton in Surrey was designated as ‘urban’ in 1996, setting the stage for an unprecedented new neighbourhood plan to increase residential density, promote social cohesion and maximize affordability and walkability. Different housing zones were created, each with guidelines on lot configurations, including widths and setbacks, allowing developers to choose the housing mix.

“Looking back, it is sometimes hard to believe that almost a decade has passed since the City initiated the East Clayton plan. With the passage of time, we tend to take the early innovation for granted. From my perspective, one aspect which really stands out about the East Clayton plan is the integration of sustainability objectives.

”In providing context for City of Surrey actions over time, Ham highlighted three provincial initiatives that had an early influence on City of Surrey thinking. These were the UniverCity Sustainable Community on Burnaby Mountain, the Provincial Guidebook, and the experience of the City of Chilliwack when it developed its Manual for Surface Water Management as a feedback loop for Guidebook development.

Building on the East Clayton Success

“The early results from East Clayton combined with the on-the-ground experience of Chilliwack gave Surrey the confidence to implement new green infrastructure objectives in two plans – the Campbell Heights Economic Development Plan (1999-2000), and the Highway 99 Corridor Land Use Plan (2002). In fact, Council made the use of green infrastructure practices a condition of both plans.”

To read the complete story, click on City of Surrey – “From Pilot Projects to a Watershed Objectives Approach”