Fused Grid and Walkability get a big boost in Red Deer, Alberta

May 13, 2012 - Posted in Uncategorised, water sustainability

Getting new ideas planted on the ground needs persistence and, more importantly, co-operation among the many actors involved in the planning and building process. One broken link in the chain and innovation stalls, the Fused Grid for example.

The Fused Grid is a neighbourhood and district layout model that was developed by Fanis Grammenos. It combines the geometries of inner city grids and of the conventional suburbs. This fusion results in retaining the best characteristics of each and none of their disadvantages while raising the quality of the neighbourhood environment.

“Many developers have embraced the Fused Grid model for planning neighbourhoods and districts for its infrastructure efficiency, its ecological features and the alluring milieu it creates for residents.  Some have ventured forward and applied it, but many others, mindful of municipal policies, have shied away from it, fearing approval delays. Any delays, and particularly in hot markets, mean unwelcome production inefficiency and unexpected added costs,” states Fanis Grammenos, Director, Urban Pattern Associates and formerly a senior researcher with the Canada Mortgage & Housing Corporation.

“This developer unease in applying the fused grid model may soon be a thing of the past. Innovative municipal leadership in the City of Red Deer, Alberta has changed the game rules. In their revised Community Planning Guidelines and Standards document the City takes a new approach. Rather than prescribing ‘preferred plans’ by means of sketches, the guidelines describe ‘preferred results’ or preferred performance.” 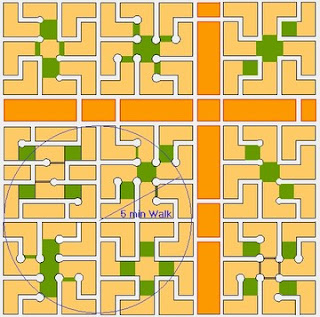 “There is general and strong agreement that walkability is a desirable, some say non-discretionary, attribute of a neighbourhood. The means of achieving it, however and ways of measuring are topics of vigorous debate.  Unlike the Water Balance computer model there is no set, objective and automated way of measuring it; and the debate goes on.”

“While the debate continues, rather than taking sides prematurely, the Red Deer guidelines bypass the obstacle and let design innovation take its course, as long as the objective of connectivity is accomplished. And this objective is simple: let no pedestrian backtrack on his way to a bus stop, park, school or conveniences store.  And the technique for achieving it also simple: let paths and parks complete the most direct route to a destination when streets, for whatever reason, could not. For its simplicity and benefits it has found a strong follower – the City of Saskatoon. The City has already incorporated it in new community plans.”

“Conveniently, neighbourhood layouts that match this objective and the technique exists in the Fused Grid set. And as an added bonus, these layouts have already been shown through a WaterBalance analysis to offer the best chances for rainwater retention than other available alternatives.”

“The Red Deer innovation combined with the Fused Grid application is a win-win proposition for developers, residents and for rainwater management. Soon other municipalities will follow this sensible, beneficial lead,” concludes Fanis Grammenos.

To read articles about the Fused Grid that were posted previously on the companion Waterbucket.ca website, click on these links: