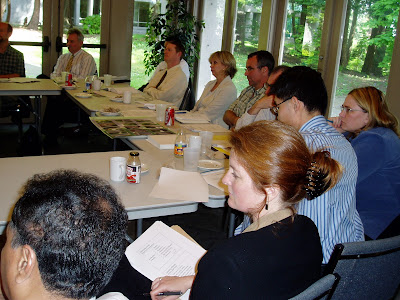 Convening for Action in British Columbia
The Green Infrastructure Partnership encourages implementation of a ‘design with nature’ approach to community planning and land (re)development, and places emphasis on educating stakeholders regarding the benefits by holding information sharing sessions and by developing guides on practice. In 2004-2005, the Partnership organized two Consultation Workshops within a 12-month period.
2004 Practitioners Workshop introduced the Green Infrastructure Partnership to a selected provincial audience. It also provided the opportunity to test and validate the direction in which the Partnership was heading. Participants included pioneer practitioners and/or  advocates of emerging green infrastructure practices. The primary purpose of the 2004 consultation was to explore the diversity of issues and difficulties inherent in defining and implementing a green infrastructure approach to land development.
Workshop outcomes are documented in the Report on the Green Infrastructure Consultation Held on May 11, 2004 in Vancouver . Section 4 of the report summarizes the event outcomes and provides a frame-of-reference for the 2005 Workshop. .
2005 REAC Workshop was conducted under the umbrella and work plan of the provincial Convening for Action initiative. The workshop was designed to engage the Regional Engineers Advisory Committee (REAC) of Metro Vancouver municipalities:

The REAC Workshop outcomes are documented in the report titled The Green Infrastructure Partnership: Convening for Action in British Columbia (July 2005 Progress Report).