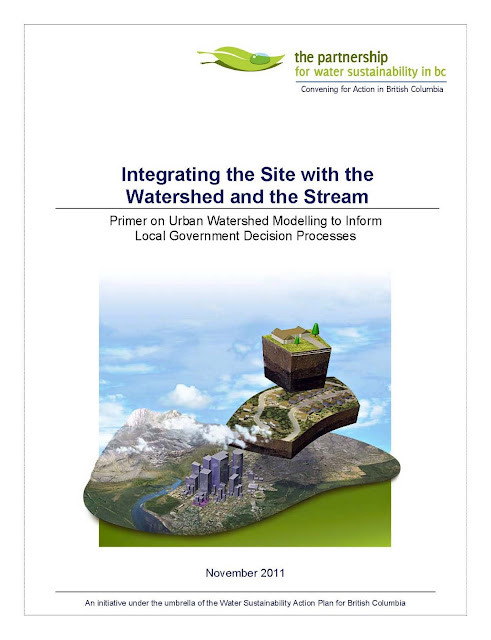 Integrating the Site with the Watershed and the Stream
ln 2002, the Province released Stormwater Planning: A Guidebook for British Columbia. The Guidebook introduced a number of concepts, including the Modelling Hierarchy. Building on the Guidebook foundation, the Partnership for Water Sustainability in British Columbia has released the Primer on Urban Watershed Modelling to Inform Local Government Decision Processes. 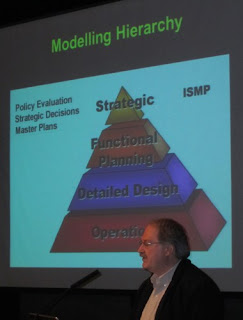 “The Modelling Hierarchy is about ‘appropriate and affordable’ computer modelling. To help local governments, the Guidebook articulated a guiding principle that the level and/or detail of modeling should reflect the information needed to make informed decisions,” states Jim Dumont, Engineering Applications Authority for the Water Balance Model Partnership.

“By addressing what appropriate and affordable should mean in practice, the Primer deals with two separate dimensions of an Integrated Stormwater Management Plan (ISMP). The first is the Watershed itself, where the focus is on the relationship between rainfall and resulting flow rates in streams. The second is the storm drainage system, where the focus is on infrastructure and the level of service.”
“The Primer provides guidance in three areas: setting performance targets, defining levels-of-service, and application of screening / scenario tools. In 2012, the Drainage Infrastructure Screening Tool will be available as a Water Balance Model module. This tool will help local governments quantify levels-of-service without the need for intensive and expensive modelling. The tool will include the capability to assess the impacts of climate change and allow the municipalities to establish priorities, and to make budget decisions for identified drainage system upgrading.”

“The Primer sets the stage for a shift to a level-of-service approach to setting watershed-specific rainwater runoff targets,” adds Kim Stephens, Executive Director for the Partnership for Water Sustainability in British Columbia. “An increasing local government ‘infrastructure deficit’ means that there will be even more competition for available funding. Thus, a driver for doing business differently is to demonstrate how to ‘do more with less’ by placing emphasis on what really matters and being outcome-oriented.”

“Sustainable Service Delivery is the Province of British Columbia’s branding for a life-cycle way of thinking about infrastructure needs and how to pay for them over time. The approach is holistic. We are challenging local governments to think about what asset management entails BEFORE the asset is built. The paradigm-shift starts with land use planning and determining what services can be provided sustainably, both fiscally and ecologically,” states the Province’s Glen Brown. He is the Deputy Inspector of Municipalities.
TO LEARN MORE: To download a copy of the Primer, click here. To read more about it on the Water Bucket website, click on Primer on Urban Watershed Modelling to Inform Local Government Decision Processes.

“We unveiled the Primer  when the Partnership and City of Surrey co-hosted the pilot Course on the ISMP Course Correction in November 2011 in the Metro Vancouver region,” states Ted van der Gulik (BC Ministry of Agriculture), also a founding Director of the Partnership for Water Sustainability. “The course provided the opportunity to teach water resource practitioners about the fundamentals of rainwater management. Otherwise this understanding could potentially be lost.”

To read a related article posted on the Water Bucket website, click on Rainwater Management in a Watershed Context – What’s the Goal? Published by Stormwater Magazine in November 2011, the article provides an overview of the divergent goals of rainwater management in the US and Canada written from a British Columbia perspective.