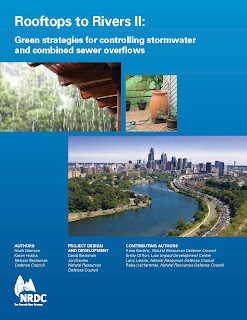 The report describes ways that cities are using green infrastructure practices to clean up their waters, literally greening their cityscapes in the process.
“The NRDC report is not the greatest example of non-regulatory creativity since ALL of the winners were CSO cities which have been under EPA and court orders for decades.  They would be examples of creativity in a highly regulated framework; including great marketing to showcase green infrastructure rather than their egregious pollution of waterways,” observes Colorado-based engineer Paul Crabtree, leader of the Rainwater-in-Context Initiative.
Formed in 2010, the Rainwater-in-Context Initiative is a sub-committee of the Congress for the New Urbanism (CNU). In the United States, the CNU is the leading organization promoting walkable, mixed-use neighborhood development, sustainable communities and healthier living conditions. 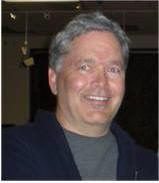 “Good report but PLEASE NOTE every case study in the report is a case of Combined Sewer Overflows,” wrote Paul Crabtree on the NRDC blog. “These cities are advanced in ALL forms of tools, because they’ve been under extreme pressure from the EPA and the courts for decades.  There are great lessons to be learned and applied to other regions or situations, but not ROTELY COPIED. Cities without CSOs are in a whole different general category.“

“The report would be more useful if it were balanced with case studies of the cities with the cleanest rivers,” concludes Paul Crabtree.

TO LEARN MORE: To read an earlier story about the NRDC report, click on Green Infrastructure is Spreading to all Corners of the North American Continent.
Also, click on Report highlights exemplary clean water practices in Philadelphia, Milwaukee, other cities to read an aricle by Kaid Benfield. He is Director, Sustainable Communities, NRDC; co-founder, LEED for Neighborhood Development rating system; and co-founder, Smart Growth America coalition.