Flashback to 2005
Drawing on the experience of two international experts, workshops held in Vancouver in May 2005 and in Victoria in June 2005 connected the dots between WHY harvest rainwater and HOW to cost-effectively implement rainwater collection, storage, treatment and delivery systems.
The two events were organized under the umbrella of the Water Sustainability Action Plan for British Columbia, which has enabled the Province to collaborate with local government and others to advance a shared vision for water stewardship and sustainable communities.
Although the Vancouver and Victoria workshops followed the same format, the content and emphasis of each event was different.  The workshops explored rainwater harvesting from both the Green Building and Water Management perspectives. 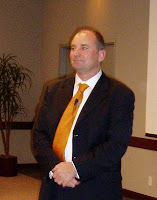 Speaking to a Vancouver audience dominated by green building professionals, Australian engineer, microbiologist and water management expert Dr. Peter Coombes described his long uphill battles to convince water utility managers and public health officials that rainwater harvesting is both cost-effective and safe.  The same myths that he has largely overcome in Australia are widely held in North America: rainwater is dirty, rainwater harvesting systems are too expensive, and it’s cheaper to expand municipal supplies. 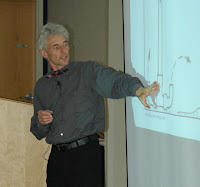 In Victoria, Klaus König shared his globetrotting experience as an architect, engineer and sustainable urban design expert with a diverse audience that included public health professionals, politicians, biologists, journalists, builders and planners in addition to architects and engineers interested in green building.  From a substantially different perspective, König reached ostensibly the same conclusions as Coombes.
TO LEARN MORE: To read the complete article that was published in the Fall 2005 issue of the Watermark magazine, click on Thinking Outside the Pipe: Rainwater Harvesting Workshop Series resonates with British Columbians. And to read a set of articles posted on the Water Bucket website, click here.