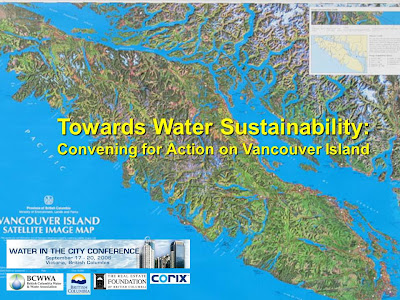 Flashback to 2006
Commencing with a workshop event in the cross-Canada Rainwater Harvesting Workshop Series in June 2005, a series of partnership-building events was organized on Vancouver Island over a 16-month period. The last event in the series was the September 2006 consultation workshop that was held as an adjunct to the Water in the City Conference in Victoria.
Titled Towards Water Sustainability on Vancouver Island, this event provided a timely opportunity to test and validate an approach that can bridge the gap between talk (interest) and action (practice) in advancing a water-centric approach to community development. Participation was by invitation. The consultation workshop generated early momentum and resulted in the launching of Convening for Action on Vancouver Island (CAVI) as a regional partnership.

“CAVI will integrate with other groups on Vancouver Island, and will encourage the introduction of a ‘design with nature’ way of thinking into local government decision processes. Further, CAVI will play a leadership role in evolving a framework for water-centric planning that is keyed to managing risk and learning by doing. The emphasis will be on bringing together local government and the development community,” foreshadowed John Finnie, the first CAVI Chair.

“Both events were by invitation because we were proactively seeking the participation of individuals who are committed to action. The goal in convening was to build an effective long-term communications network,” stated Eric Bonham at the CAVI launch. He was the driving force behind the Meeting of the Minds initiative when he was a Director in the Ministry of Municipal Affairs.

TO LEARN MORE: To read the complete story posted on the Water Bucket website, click on ‘Convening for Action on Vancouver Island’ Launched at Water in the City Conference.