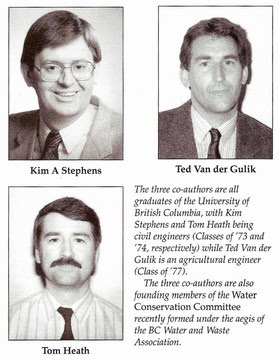 Flashback to 1992
The more things change, the more it seems that they stay the same. When British Columbia experienced province-wide drought conditions in 2009, this provided an opportunity to reflect on insights gained and/or lessons learned from previous droughts.

In 1992, three founding members of the BCWWA Water Sustainability Committee collaborated to present two papers on “the British Columbia drought management experience” at the Annual AWWA Conference that was held in Vancouver. Their presentations were then adapted and published as an integrated magazine article by the former BC Professional Engineer, forerunner of today’s Innovation Magazine.

WHAT THEY WROTE IN 1992: “The summer of 1992 has once again heightened awareness throughout British Columbia of the limited capabilities of many existing water supply sources. Although there is a perception that BC is water-rich, the reality is that we are often seasonally water-short (mainly because of storage limitations) during the period when water demand is heaviest due to lawn and garden irrigation,” state the authors in their opening paragraph.
“For the third time in six years, drought conditions have been experienced in the southern part of BC, and in particular the Greater Vancouver region. The 1987drought is one of the most extreme on record, with a return period rating in the order of 100 years. It followed a relatively benign period of almost half a century.”
“The extended duration of this benign period may have lulled water supply managers into a false sense of security, especially with respect to the reliable watershed yields of surface water sources during a “dry” summer following a low snowpack winter. The last six years may possibly be reminiscent of conditions i
TO LEARN MORE: To read the complete article by Ted van der Gulik, Tom Heath and Kim Stephens, click on Water, Water Everywhere…Does British Columbia Really Need A Water Conservation Strategy?