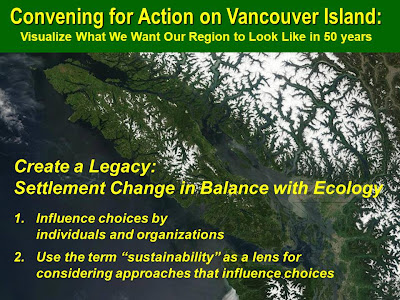 Presentation made at 2010 BCWWA Conference
In 2010, the British Columbia Water & Waste Association (BCWWA) honoured John Finnie with the first Leadership in Water Sustainability Award. The award recognizes his contributions, both as Chair of the Convening for Action on Vancouver Island initiative (known by the acronym CAVI), and as General Manager of Regional and Community Utilities with the Regional District of Nanaimo.

“As CAVI Chair, John has provided strong and effective leadership for more than three years. His personal/professional credibility has been a key ingredient in establishing the legitimacy of CAVI in the minds of local government politicians and staff. John has been consistent in his vision and input,” stated Jack Bryden, a recent Past-President when he introduced John Finnie at the awards ceremony held in Whistler in May 2010.
“As a member of the RDN Leadership Team, John has been responsible for bringing the RDN’s vision for a Drinking Water & Watershed Protection Action Plan to fruition. To make this a reality, the RDN adopted a new service to coordinate a Region-based drinking water and watershed protection action plan.”
“This is one example of John’s leadership and ability to champion initiatives that support integration, collaboration and sustainability.  Because of John’s role, the RDN is now seen as a provincial leader with respect to development and implementation of sustainable water services,” concluded Jack Bryden.

“When we launched CAVI in September 2006, we identified several goals. First and foremost, that by 2010 Vancouver Island would be well on the way to achieving water sustainability”, states John Finnie.  “Reflecting on what has been accomplished since 2006, the pieces of the puzzle are now in place to make a shared Vancouver Island vision tangible.”
To Learn More: To read the complete story posted on the Water Bucket website, click on John Finnie receives Leadership in Water Sustainability Award.