After 5 years of providing stellar leadership, the RDN’s John Finnie steps down as CAVI Chair 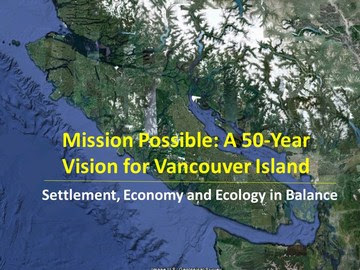 Announcement made at the “Forum within the State of the Island Summit”
John Finnie, General Manager for Regional and Community Utilities at the Regional District of Nanaimo (RDN), has been Chair of CAVI-Convening for Action on Vancouver Island since 2006. The initiative was formally launched in September 2006 in conjunction with the Water in the City Conference, held in Victoria.
At the “Forum within the Summit” in October, John Finnie announced that he was stepping down as CAVI Chair and handing the reins over to Derek Richmond, Manager of Engineering with the City of Courtenay. The Summit was hosted by the Vancouver Island Economic Alliance, and the Forum was co-organized by CAVI and the VIEA Sustainability Task Force. 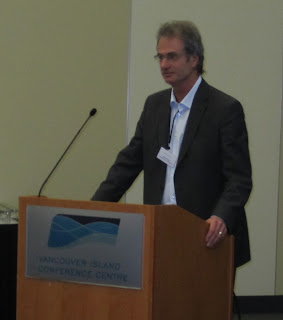 “CAVI’s mission is to promote this goal by engaging governments, developers and the community in water-centric thinking, planning and development activities. CAVI is in effect a multi-agency support network undertaking to build and educate on practices and initiatives that are already underway.”

“We have done well and have exceeded our program expectations.  So I’m pleased at this time to be turning the Chair over to Derek Richmond of the City of Courtenay.  With the CAVI activities taking place and planned for the near future in the Comox Valley, Derek is well positioned to continue to lead the CAVI movement forward,” concluded John Finnie.

TO LEARN MORE: To access the Forum ‘homepage’ on the Water Bucket website and learn more about the Forum context and program design, click here.  To view the program at a glance, click on VIEA Summit: Draft Agenda for CAVI Forum.

To download a document that explains the Forum structure and what was covered, click on Convening for Action Vision for the Forum within the Summit.
E-Blast #2011-54
October 25, 2011