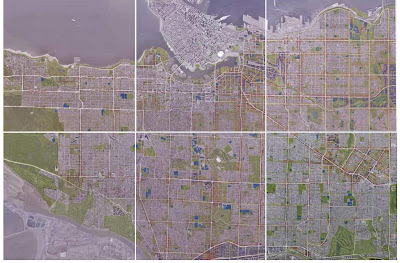 Plan Paints a Compelling Picture
“Vancouver is one of only a few major cities in North America that does not have a physical master plan guiding change and growth,” wrote Bob Ransford in an article published in the Vancouver Sun newspaper in December 2010.

“The Vancouver Town Planning Commission hired American urban planner Harland Bartholomew in the 1920s to draft the last city-wide plan. Bartholomew’s plan, completed in 1929, was never officially adopted, but did set the tone for much of Vancouver’s current urban structure.”
“But now, a group of architecture and planning students at the University of B.C. has recently crafted a master plan for Vancouver that paints a vivid and compelling picture of change in Vancouver over the next 40 years.”
TO LEARN MORE: To read the complete story posted on the Water Bucket website, click on UBC students in Patrick Condon’s urban design course unveil “Vancouver 2050 Vision: The Streetcar City”