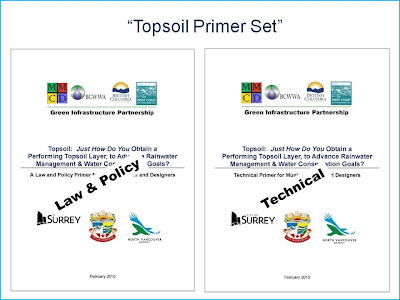 Importance of Topsoil
Topsoil is the interface between rainwater management and drought management. Soil depth creates a sponge…. which can limit runoff during wet-weather periods; and reduce water need during dry-weather periods.
In February 2010, the Green Infrastructure Partnership released the ‘Topsoil Primer Set’. The venue for the release was the Bowker Creek Forum.  The ‘Topsoil  Primer Set’ synthesizes the pioneering experience of the City of Courtenay, City of Surrey and District of North Vancouver.

“A key challenge common to many green infrastructure projects is that there are many different departments and areas of responsibility engaged around the management of urban watersheds,” states Deborah Carlson, who represents West Coast Environmental Law on the Green Infrastructure Partnership steering committee.
‘Focussing on a single type of project—in this case, ‘topsoil requirements’ – can make it easier to map out the actors involved and the various decisions, actions and regulatory tools required and available to make the project a reality.”
TO LEARN MORE:  To read the complete story posted on the Convening for Action Community-of-Interest, click on “Topsoil Primer Set” connects the dots between rainwater management and drought management