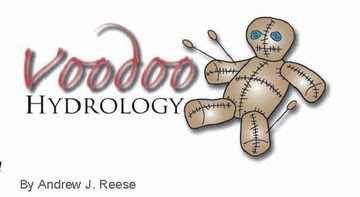 Magical practice considered to be a form of black magic but also a religion to some
Andy Reese, in the July/August 2006 issue of Stormwater Magazine, offered his perspective on urban hydrologic practice. His article is about understanding some of the basics of methods drainage designers have taken for granted for years.
Reese states in the article that he has been repeatedly reminded of the black box nature of urban stormwater hydrologic design, and the often minimal level of understanding of many designers who are sizing and placing infrastructure within urban neighborhoods and other developments every day. 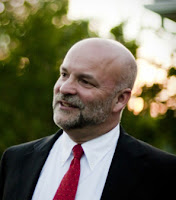 A well-known humourist, Reese wryly notes that: “Urban hydrology, as commonly practiced, is an inexact science at best. Most professional hydrologists would hold their noses at some of the methods commonly used. The reason is that the methods are a number of steps back from our best statistical estimate of reality. Urban hydrology is a compromise between accuracy and data availability. And as Murphy would have it, a densely populated urban setting is the one place a designer would most want to be accurate in flooding predictions, and is also the one place where accuracy is often least possible to attain.”
The article points out some of the methodologies that can be used to obtain any number of “correct” answers. This is the spirit of the article in being provocative, as contrasted with a compilation of current and acceptable state of the practice.
About the Author: Andrew (Andy) J. Reese has published over fifty articles and has co-authored (with Tom Debo) a best-selling 1400 page textbook on Municipal Stormwater Management. He has worked in all fifty states in a wide variety of assignments from highly technical modeling and criteria development to stakeholder group facilitation and stormwater utility implementation.