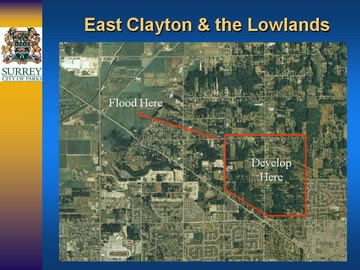 Green Infrastructure Innovation
The 250-hectare neighbourhood of East Clayton in Surrey was designated as ‘urban’ in 1996, setting the stage for an unprecedented new neighbourhood plan to increase residential density, promote social cohesion and maximize affordability and walkability. Different housing zones were created, each with guidelines on lot configurations, including widths and setbacks, allowing developers to choose the housing mix.

“The East Clayton development in Surrey was the first development in the Lower Mainland that utilized Low Impact Development (LID) techniques and facilities. The need to embrace LID practices arose from the need to prevent further increases in damage to both the environment and the agricultural community resulting from the increases in runoff from urban areas,” explains Jim Dumont, the Engineering Applications Authority for the Inter-Governmental Partnership that is responsible for the Water Balance Model.
To read the complete story posted on the Water Bucket website, click on East Clayton ‘Green’ Development in Surrey established BC precedent for implementing performance target approach to rainfall capture.