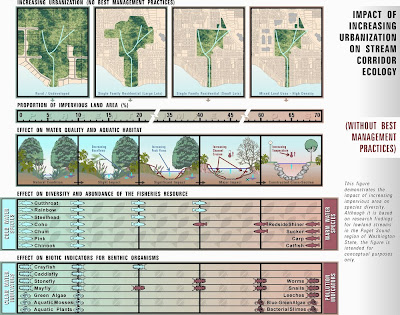 Stream Diversity Declines at Extremely Low Levels of Urban Development
Scientists in the United States have found that there are consistent and widespread declines in stream biodiversity at lower levels of urban development more damaging than what was previously believed. Approximately 80 percent of the biodiversity loss came between ½ and 2 percent of impervious cover, and the remaining 20 percent of loss came between 2 and 25 percent impervious cover. The study appears online in the journal Ecological Applications.
The researchers used samples from about 2,000 streams and compared satellite imagery and land cover datasets to analyze how the water ecosystem and biodiversity responded to various levels of impervious cover.

“Such studies are rare indeed and should receive broad circulation.  This study adds to the work that Jim Karr, Derek Booth, and Chris May have done to define stream health with increments of watershed disturbance,” observes Tom Holz. A recognized stormwater authority, Tom Holz is well-known in Washington State for his tireless efforts in leading change in the field of rainwater management and green infrastructure. He is a Director of the People for Puget Sound.

“The implications of this study regarding standards for development are truly sobering.  Our touch must be as light as those builders who used to prepare land with hand tools.”