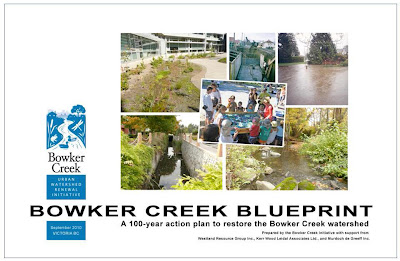 Implementing A New Culture for Urban Watershed Protection and Restoration
The experience of the Bowker Creek Initiative in British Columbia’s Capital Region demonstrates what can be accomplished through a ‘regional team approach’. This unique multi-jurisdictional effort has produced the Bowker Creek Blueprint. This is a 100-Year Action Plan to systematically and incrementally restore the watershed landscape in the heart of the Capital Region on Vancouver Island. 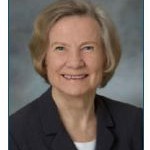 “I have been following the incredible successes you have been experiencing on the west coast,” states Eva Kras, a Past-President of the Canadian Society of Ecological Economics (CANSEE) and author of The Blockage. Eva Kras is also president of the International Lerma-Chapala Foundation, an international non-government organization.
“I would really like to take this opportunity to CONGRATULATE ALL of those who have been involved in this most recent ‘breakthrough’, the Bowker Creek Blueprint. This is truly impressive and hopefully you are sharing it with other parts of Canada, as well as abroad. Many will be fascinated with the ‘governance’ issues alone. This example of what can be done will serve as a positive model for many.”

Bowker shows how to unblock “The Blockage” “It is generally accepted that we have a serious worldwide crisis related to environmental breakdown, as well as a rapid deterioriation in accompanying social and economic areas. In the midst of this crisis most major decision makers seem unable to find viable solutions despite developing sustainable sounding policies. Where is the blockage?,” writes Eva Kras in her book, published in 2007. The Bowker Creek Initiative demonstrates how collaboration and a top-down and bottom-up approach can “unblock the blockage”.