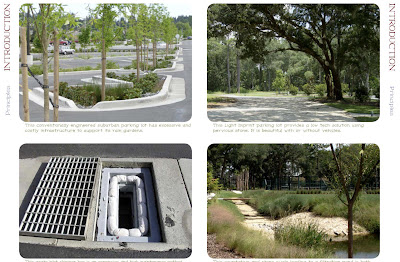 “Light Imprint is an intrinsically green design strategy, producing a compact, connected design that respects nature and site terrain. It recognizes the importance of public civic spaces and connectivity. This approach developed from a need to coordinate engineering concerns with traditional neighborhood design principles,” write Thomas Low and his four co-authors in an article published in the March-April 2011 issue of Stormwater Magazine.

LAYING LIGHTLY ON THE LAND: “The term Light Imprint basically means ‘laying lightly on the land.’ And that’s where the name came from, it’s just thinking that way. Respecting the natural drainage and topography in a way that actually makes more sense,” Low  explained in a recent radio interview.

“People think well that sounds like it’s more expensive. But we’re finding out is, that because we’re actually using less land, we’re actually connecting things in a better way, we’re actually figuring out that it’s actually less expensive to do, and it’s better for the environment, and a growing number of people really want to live in places like this. So it’s really a win-win-win opportunity.”

THE BENEFITS OF ‘LIGHT IMPRINT”: “The success of Light Imprint can be measured in studies of stormwater runoff quality, quantity discharge volume rates, and percolation rates that promote aquifer recharge. Studies have found measurable positive progress in all these categories with the use of Light Imprint,” the authors state in Stormwater Magazine.

“It will take time for Light Imprint to become the norm rather than the exception. Designers and developers may not be able to implement all Light Imprint elements right away, but they could implement them in incremental stages as certain components are approved. Because of the pace of development and the need for projects to succeed, it is especially important to plan for incremental implementation,” conclude the authors.”