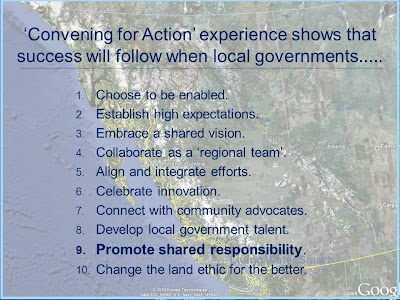 Imitation is the sincerest form of flattery. At the recent 2011 Sustainable Communities Conference, organized by the Federation of Canadian Municipalities (FCM), innovators from across Canada shared their breakthrough examples of municipal sustainability in an interactive session titled Steal This Idea!

The session was moderated by Emanuel Machado. He is Manager of Sustainability Services and Special Projects with the District of Sechelt, BC. Previously, he was with the City of Dawson Creek.

“Water in BC is under-valued, under-priced and over-used. The Water Bucket website is having a tremendous impact in helping communities in BC address that challenge by providing awareness, tools and resources that build capacity,” he stated.

“Local governments are transitioning from simply pumping and treating water to managing earth’s most precious resource. An example of that transition can be seen in Dawson Creek (in Northeast British Columbia), a city at the forefront of the pressure being felt by communities across Canada due to climate change impacts and increased residential and industrial demands on aging water systems. The December 2006 workshop that introduced the City to BC’s Water Sustainability Action Plan was a catalyst for that change.”

To learn more about the Water Sustainability Action Plan for British Columbia, click on Mission Possible: A 50-Year Vision for Urban Watershed Restoration.