Seven Rules for Sustainable Communities; Water is at the Heart of Design Strategies for the Post-Carbon World 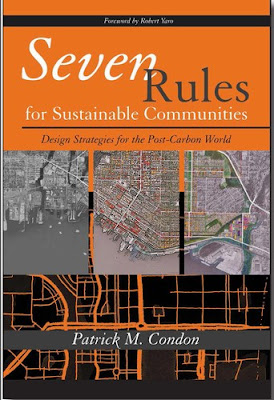 New book by Patrick Condon explains why residents of BC’s Lower Mainland lead by example in showing how to save the planet!
“Right now the Lower Mainland of British Columbia leads any other region in both Canada and the United States in reversing the rush to global climate collapse,” writes Patrick Condon in an article about his new book Seven Rules for Sustainable Communities; Design Strategies for the Post-Carbon World.
Using the Vancouver Region as his case study, Patrick Condon compares and contrasts the problems and progress of this region with those of other North American urban areas.
He explains this relationship in an accessible way, and goes on to show how conforming to seven simple rules for community design could literally do a world of good. Each chapter in the book explains one rule in depth, adding a wealth of research to support each claim.

“Of the seven rules, two of them are about water: Create a linked system of natural areas and parks, and lighter greener cheaper smarter infrastructure. This book is my attempt to ‘put it all together’ with ‘water at the heart of community design’,” states Patrick Condon.
To learn more, click on Patrick Condon, author of ‘Seven Rules for Sustainable Communities’, adapts his formula to fit BC’s most populous region
News Release #2010-43
November 9, 2010