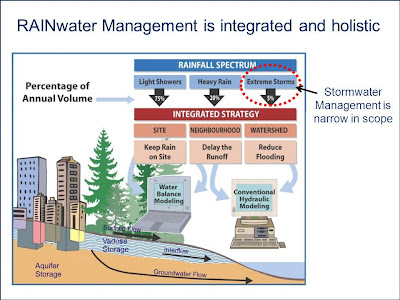 RAINwater Management is about protecting streams, not how much one volume can infiltrate

The rollout of Beyond the Guidebook 2010 commenced on September 27th at the 2010 annual convention of local governments. The rollout will continue in October in conjunction with a number of regional events.

Beyond the Guidebook 2010 provides local governments with guidance for developing outcome-oriented urban watershed plans. The outcome intended is an improvement in watershed and stream health while allowing a municipality to continue to build for the future.

The goal is protect stream health and enhance the future for all municipal residents. Achieving that goal requires a runoff-based approach that specifically addresses how the urban fabric influences the streams. The key is that performance targets for rainfall capture result in flow mitigation that would accomplish the most benefit for the stream.
A framework for meeting watershed-specific targets at the site scale is consolidated as ‘Table 2’ in Beyond the Guidebook 2010. This table was developed in conjunction with the consultation process for Metro Vancouver’s Integrated Liquid Waste & Resource Management Plan.
To download a copy of this provincial guidance document, click here. To learn more about the application of Table 2, click on Beyond the Guidebook 2010 Advances Runoff-Based Approach to Setting Watershed Performance Targets.
News Release #39
October 12, 2010 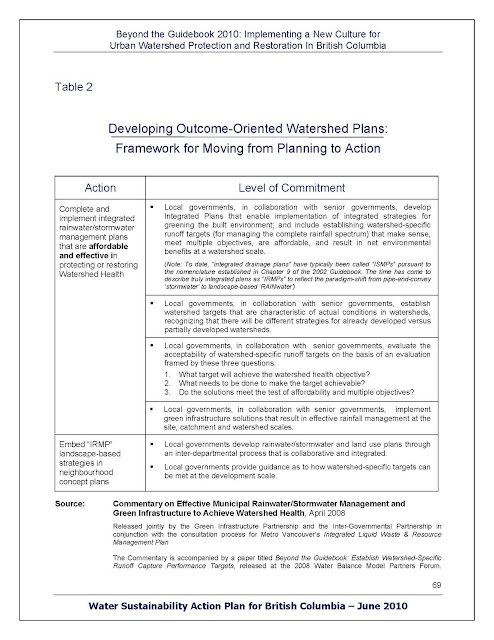