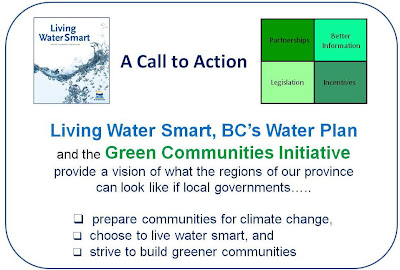 ‘Moving from market-niche to market-share’ across North America
Legislation has been introduced in the United States that prioritizes green infrastructure as an alternative to traditional hard infrastructure fixes.

“In British Columbia, we are watching with interest to see how green infrastructure legislative initiatives play out federally in the United States,” comments Raymond Fung, Chair of the Green Infrastructure Partnership.
“In the 1990s, we in BC looked to practices in Washington State as leading-edge examples of green infrastructure.  We’ve been able to learn from those experiences and to develop a ‘bottom up’ educational approach with stakeholders to achieve the same objectives.  So the American experience provides us with a basis for comparison with a more regulatory approach.”
To learn more, click on Water-Centric Green Infrastructure: ‘Moving from market-niche to market-share’ across North America
News Release #2010-27
July 20, 2010