Re-Inventing Rainwater Management: A Strategy to Protect Health and Restore Nature in the Capital Region 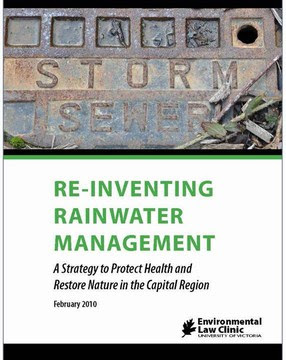 “The report also demonstrates that ‘Design with Nature’ approaches and Low Impact Development techniques are environmentally superior, and often are cheaper. In addition, they can provide incalculable benefits,” states Calvin Sanborn, Legal Director of the Environmental Law Clinic at the University of Victoria.
“Modern rainwater management looks at the dynamics of the entire watershed and identifies how development can use ‘green infrastructure’ to restore the function of trees, soil and open space.”
To download a copy of the report and read a summary story posted on the Water Bucket website, click on Re-Inventing Rainwater Management.
News Release #2010-07
March 2, 2010