John Finnie, Chair of Convening for Action on Vancouver Island (CAVI), is first winner of ‘Leadership in Water Sustainability Award’ 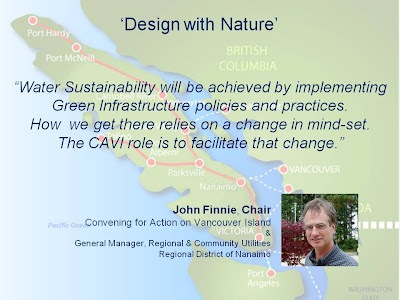 BCWWA announces inaugural award at 2010 Annual Conference
John Finnie was honoured by the British Columbia Water & Waste Association with the first Leadership in Water Sustainability Award. The award recognizes his contributions as CAVI Chair and as General Manager of Regional and Community Utilities with the Regional District of Nanaimo.
“When we launched CAVI in September 2006, we identified several goals. First and foremost, that by 2010 Vancouver Island would be well on the way to achieving water sustainability”, states John Finnie.  “Reflecting on what has been accomplished since 2006, the pieces of the puzzle are now in place to make a shared Vancouver Island vision tangible.”
To learn more, click on John Finnie receives Leadership in Water Sustainability Award.
News Release #2010-17
May 11, 2010