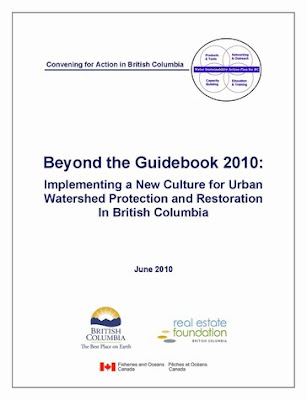 Implementing a New Culture for Urban Watershed Protection and Restoration in British Columbia
Release of Stormwater Planning: A Guidebook for British Columbia in 2002 was a catalyst for action to implement a ‘design with nature’ approach to rainwater management and green infrastructure. 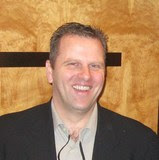 “If one goes back 10 years, there was a void of policy and legislation. This led us down an educational path as the logical alternative,” states Glen Brown, Executive Director in the BC Ministry of Community & Rural Development. “We took the Guidebook, which is a document, and we have moved it to implementation. Last Friday at the ‘Dialogue in Nanaimo’, the convening for action partnership released Beyond the Guidebook 2010. This tells our story.”

“Beyond the Guidebook 2010 provides local governments with ‘how to’ guidance for developing outcome-oriented urban watershed plans,” adds Corino Salomi, Lower Fraser Valley Area Manager with the Department of Fisheries & Oceans. “The Bowker Creek Blueprint in the Capital Region, for example, demonstrates how to establish the vision, set the target and then implement. This is what the Metro Vancouver Reference Panel is also telling us.”
To learn more and to download a copy, click on Beyond the Guidebook 2010: Implementing a New Culture for Urban Watershed Protection and Restoration in British Columbia
News Release #2010-22
June 15, 2010