GRANTING A RIVER ‘PERSONHOOD’ COULD HELP PROTECT IT: “Galvanized by widespread environmental degradation and rising Indigenous rights movements, Indigenous communities around the world are leading the way in upholding the rights of sacred and ancestral rivers,” wrote Justine Townsend, University of Guelph, in an opinion piece published by The Conversation Canada (June 2021)

This article by Justine Townsend et al is republished from The Conversation under a Creative Commons license. Read the original article. The Conversation rated this story as one of 10 great stories from the Environment + Energy section in 2021 to read — or re-read.

Justine Townsend’s doctoral research interrogates the possibilities for decolonization and reconciliation through the support of Indigenous-led conservation in Canada. This builds on her Masters research, which explored Haida self-determination and land use planning on Haida Gwaii.

The article co-authors are Alexis Bunten, Co-Director of the Bioneers Indigeneity Program; Catherine Iorns, Professor of Law at Te Herenga Waka — Victoria University of Wellington; and Lindsay Borrows, PhD Candidate in Law at University of Alberta. 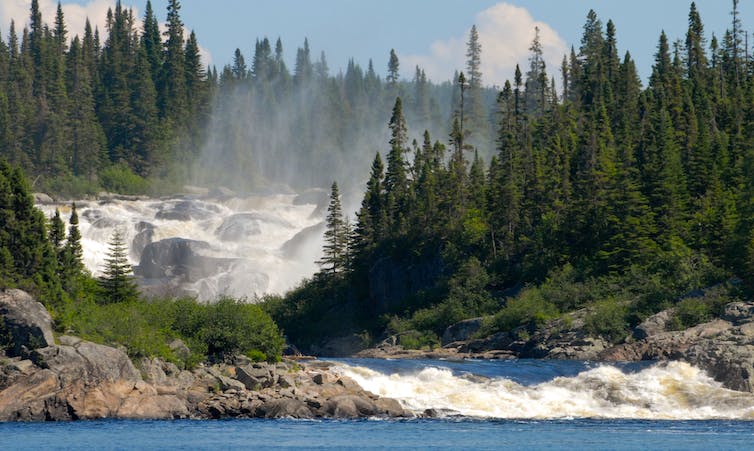 In February, the Innu Council of Ekuanitshit and the Minganie Regional County Municipality declared the Muteshekau Shipu (Magpie River) a legal person, a move that may provide greater certainty for this majestic river’s future.
(Boreal River)

Rights for nature: How granting a river ‘personhood’ could help protect it

The Muteshekau Shipu (Magpie River) runs nearly 300 kilometres in Québec’s Côte-Nord region. The river is culturally significant for the Innu and it is popular with white water paddlers and rafters.

Despite efforts to protect the river, Muteshekau Shipu continues to be threatened by potential new hydroelectric dam development. But, in February, the Innu Council of Ekuanitshit and the Minganie Regional County Municipality declared the Muteshekau Shipu (Magpie River) a legal person, a move that may provide greater certainty for this majestic river’s future.

Extractive values — the belief that natural entities are resources that can be used for human benefit with little regard for their well-being and longevity — are deeply embedded in Canada’s legal and economic systems.

These values influence the ideologies at the root of our biodiversity and climate crises. These ideologies justify the transformation of rivers, forests and the atmosphere into commodities and private property at our own peril. Recognizing natural entities as legal persons and enshrining their rights in law is a promising legal innovation.

Galvanized by widespread environmental degradation and rising Indigenous rights movements, Indigenous communities around the world are leading the way in upholding the rights of sacred and ancestral rivers. This includes Māori tribal relationships with the Whanganui River in Aotearoa New Zealand, the role of Indigenous and Afro-Colombian communities in the Atrato River in Colombia, and the Yurok Tribal Council’s granting legal rights of personhood to the Klamath River through an ordinance in the United States.

The idea that nature is a sentient being isn’t new to Indigenous and other traditional peoples. “The vision of the Innu is that Nature is living. Everything is alive,” said Chief Piétacho. 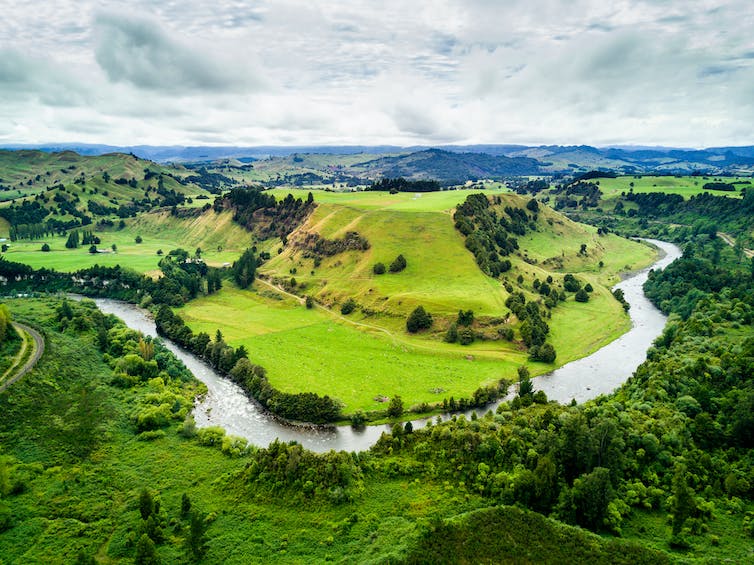 In 2017, the New Zealand Parliament recognized what Māori leaders had been saying for generations, that the Whanganui River is a living being and should have the rights, duties, powers and liabilities of a person.
(Shutterstock)

Recognizing the rights of nature are modern expressions of long-practised Indigenous laws. Indigenous laws are as diverse as Indigenous cultures yet share an understanding that humans are an integral part of the natural world. These laws emphasize respect for all beings and responsibilities to care for lands and waters. Trees, mountains and plants are relatives, not commodities that can be privately owned and exploited.

The rights-of-nature movement may seem radical to some people. It challenges Eurocentric values such as human dominance over the natural world, which is considered largely inanimate. The conservation movement itself is founded on a worldview that sees “wilderness” as something separate to be protected from humans. The “fortress” conservation movement is ideologically non-commensurate with Indigenous ways of thinking about being a part of nature. This belief was used to justify the forced relocation of many Indigenous Peoples from their territories to establish parks and protected areas.

Rights understood through a western, liberal and individualistic lens overlook collective responsibilities to the natural world. “I sincerely think Québec and Canada missed their responsibility; they aren’t protecting the river from development,” said Chief Piétacho.

Bridging western and Indigenous legal systems through a rights-of-nature approach is one tool for encouraging a kincentric view of the world, which sees humans as “part of an extended ecological family that shares ancestry and origins.”

Indigenous laws mirror and reinforce relational worldviews that view living entities as relatives, not resources. This in turn shapes social conduct that emphasizes respect and responsibility to the natural world. Innovative governance arrangements are one means through which distinct worldviews and associated laws can be woven together. 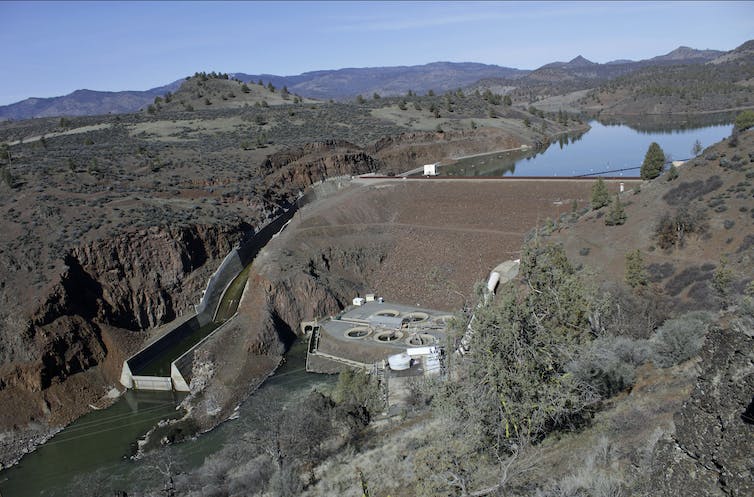 Four dams along the Klamath River, which flows through Yurok Territory, are set to be removed to begin the restoration of the river that runs from Oregon to northern California. (AP Photo/Gillian Flaccus)

Rivers speak but since western laws and institutions are not designed to listen, people must act as intermediaries voicing perspectives on their behalf. Indigenous laws are well positioned to conceptualize the decision-making structures needed to breathe life into legal personhood.

In 2014, Tūhoe iwi (Māori) and the New Zealand government granted legal personhood to Te Urewera, an ancestral forest and former national park. They created a board responsible for making decisions in the best interests of Te Urewera. Tūhoe, as children of Tu Urewera, give expression to her through the board.

In Northern Canada, Łutsël K’é Dene First Nation established Thaidene Nëné as an Indigenous Protected Area under Dene law. It is also protected as a park and conservation area under Canadian and territorial (Northwest Territories) legislation. The management board, Thaidene Nëné Xá Dá Yáłtı, is composed of members of Łutsël K’é Dene First Nation, the Government of Canada and the Government of the Northwest Territories. Once appointed, members no longer represent their organizations, they speak for Thaidene Nëné.

Examples like Thaidene Nëné are the exception and not the norm in Canada, although this may be changing. There is a national mandate to support Indigenous-led conservation initiatives and advance reconciliation. This support combined with Indigenous leadership and accompanying legal innovations present new opportunities for caring for the land and waters.

The Muteshekau Shipu river declaration — and the legal guardianship role for Innu — is an example governments can learn from. “If the government wants to effectively protect Nature, they should consider this option so protected areas would be protected along with our rights,” said Chief Piétacho.

To create just and liveable futures for all our relatives (human and otherwise), Canadian laws and policies need further innovation. Vesting legal personhood in natural entities is a promising intervention when Indigenous Peoples represent these entities. It elevates the standing of nature for all peoples and respects the laws of Indigenous Peoples.

CREATING A CLIMATE FOR CHANGE IN BRITISH COLUMBIA: Michael Blackstock’s Vision for Blue Ecology as a Bridge between Two Worlds

Blue Ecology is the pathway to reach Water Reconciliation

“Blue Ecology has been a two-decade long journey of discovery for Michael Blackstock, highlighted by his appointment to a UNESCO Expert Panel for a 4-year term in 2008. His work on the Expert Panel resulted in an invitation to share his Blue Ecology message at an international symposium held in October 2008 by the International Association of Hydrological Sciences (IAHS),” stated Kim Stephens, Waterbucket eNews Editor and Executive Director.

“In his peer-reviewed paper titled Blue Ecology and climate change: interweaving cultural perspectives on water, an indigenous case study, Michael laid out the case for an attitude change and culture-shift related to water. In the decade-plus since, he has written and/or contributed to a series of books that further explore and build on this theme.”

A New Way of Looking at Water

“Hope is not a passive desire but an active attitude,” states Michael Blackstock.

“I really see the value of each culture being genuinely curious about each other and willing to interweave to resolve disputes: This is my action.”

“Now is the time to act on the belief that if we interweave our strengths as traditional knowledge keepers, scientists, poets, artists, and architects in a collaborative manner, we can make a difference.”

“Blue Ecology is an incremental example of how we can interweave cultural perspectives on water, but that is just a starting point in this new era of interweaving.”

If readers are curious about the work of Michael Blackstock, the Partnership for Water Sustainability encourages you to visit the Blue Ecology homepage on this waterbucket.ca website: https://waterbucket.ca/wcp/category/blue-ecology-michael-blackstock/

Also, for an overview of the Blue Ecology vision as the bridge between two worlds, download a copy of a PowerPoint presentation by Michael Blackstock titled Launching the Blue Ecology Institute Foundation. Extracts are included below.