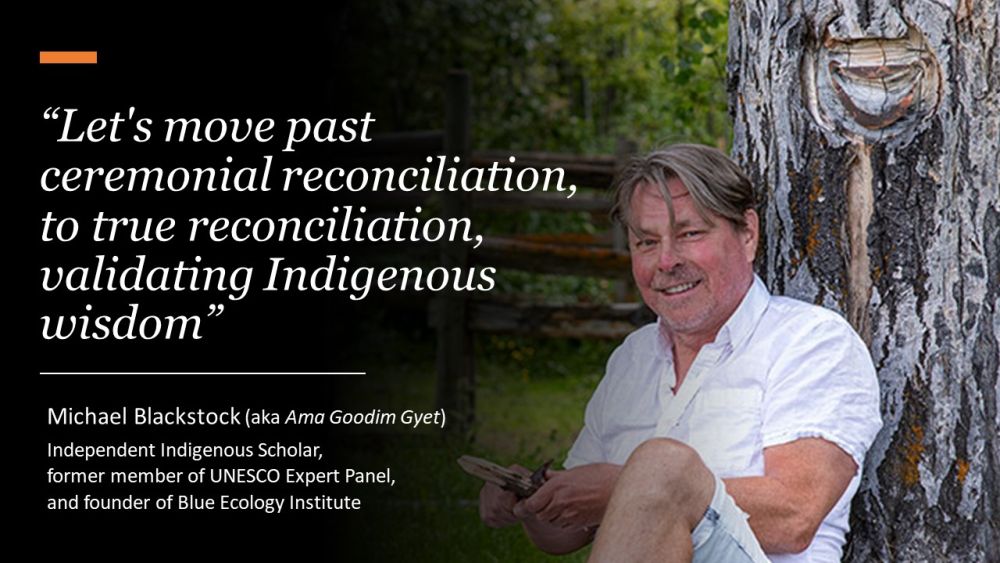 “Interweaving is not integration, just as equality is not about assimilation and creativity is not empirical. Interweaving is collaborative and incremental rather than a revolutionary process. Collaborators identify packets of knowledge that would benefit from the interweaving process. Blue Ecology is meant to be a companion because it augments existing Western science hydrology rather than displacing this knowledge,” stated Michael Blackstock.

“There is a humility component to Water Reconciliation and that can be hard for both sides when we are building a bridge to connect each other. My question for the Western science world is this: Are you prepared and willing to change your definition of water in science? And if you are, what would the change in definition look like?”

“Blue Ecology has been a two-decade long journey of discovery for Michael Blackstock, highlighted by his appointment to a UNESCO Expert Panel for a 4-year term in 2008. His work on the Expert Panel resulted in an invitation to share his Blue Ecology message at an international symposium held in October 2008 by the International Association of Hydrological Sciences,” explained Kim Stephens, Executive Director, Partnership for Water Sustainability in British Columbia.

“This international exposure, and Michael’s inspirational impact on this gathering of senior scientists, was a watershed moment in his life. He established his credibility with the hydrology community, and this led directly to his peer-reviewed paper, published in February 2009 by the  International Association of Hydrological Sciences. In the decade-plus since, he has written and/or contributed to series of books that further explore and build on this theme.”

“While international recognition gave Blue Ecology early credibility and profile, there was limited awareness within British Columbia of what Michael Blackstock had accomplished on the global stage. Fast forward to November 2017. That is when the Partnership for Water Sustainability held the Blue Ecology Workshop to begin the process of mainstreaming Michael Blackstock’s work and ecological philosophical into the local government setting.”

To read the complete story, download a PDF copy of Living Water Smart in British Columbia: Blue Ecology Virtual Seminar on “Creating a Climate for Change”.