GROUNDWATER LICENSING IN BRITISH COLUMBIA IS A CRISIS IN THE MAKING: “People have been issuing warnings about this for several years, but a legislature committee heard first-hand last week about how bad it could get,” wrote columnist Les Leyne in his article published by the Victoria Times Colonist (October 2021)

British Columbia’s groundwater licensing regulation is a foundation piece for successful implementation of the Water Sustainability Act (WSA), passed in 2016. The WSA is once-in-a-generation, transformational legislation. The 6-year transition period for groundwater licensing ends on March 1, 2022. With five months to go, the dilemma is that a mere 1 in 5 small business owners and farmers who rely on groundwater have applied for a licence. This is a looming crisis with far-reaching ramifications for the BC economy.

In mid-September 2021, the Partnership for Water Sustainability formally released its second Primer on groundwater licensing implementation. It is a compendium of very persuasive and informed opinions from people who have expert knowledge and really understand the issue.

In his presentation to the Select Standing Committee on Government Finance on September 30, 2021, Ted van der Gulik of the Partnership for Water Sustainability in British Columbia laid out a How-To-Framework for a 10-year plan of action to get groundwater licensing back on track.

15,000 Water Wells Could Be Declared Illegal in 2022,
Causing Economic Chaos

“There was a pivotal moment in B.C.’s resource management history about five years ago when the Water Sustainability Act was passed,” wrote Les Leyne in his opening sentence about the presentation by Ted van der Gulik to the Select Standing Committee on Finance and Government Services.

“It brought the management of groundwater into the modern era, to congratulations all around. It set up a regime to regulate, protect and use it fairly. The ‘once in a generation’ bill was going to transform groundwater policy.”

“The only problem was that scarcely anyone paid any attention to it.”

To read the complete column by Les Leyne in the Victoria Times Colonist, download a copy of 15,000 water wells could be declared illegal in 2022, causing economic chaos. 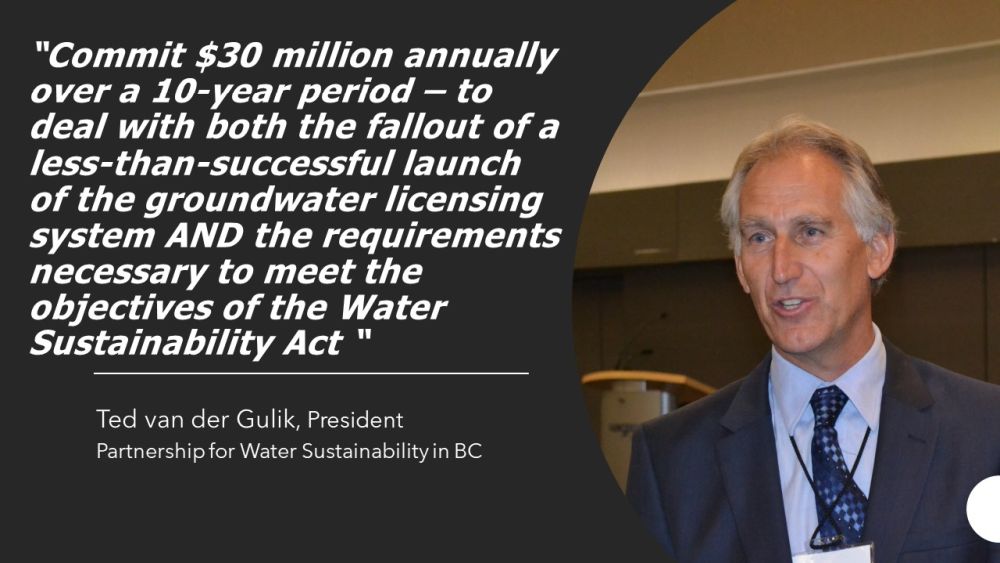 Partnership for Water Sustainability issues a “Call for Action” to rectify a chaotic situation, provide a dedicated budget, and get groundwater licensing implementation back on track in British Columbia