CONTEXT FOR BLUE ECOLOGY AND WATER RECONCILIATION: “Over the last several years, our team of Indigenous and non-Indigenous researchers have been exploring what this word (reconciliation) means to people in Canada. In doing so, we have come to understand that our relationship to the natural world is an important, yet often overlooked, part of furthering reconciliation,” wrote University of Manitoba researchers Aleah Fontaine and Katherine Starzyk in an article published by The Conversation (August 2021)

This article co-authored by the University of Manitoba’s Aleah Fontaine and Katherine Starzyk is republished from The Conversation under a Creative Commons license. Read the original article.

Katherine B. Starzyk, Associate Professor and Social Justice Laboratory Director, aims to contribute to social justice. Katherine’s research focuses on how to shift attitudes toward past and present human rights issues. 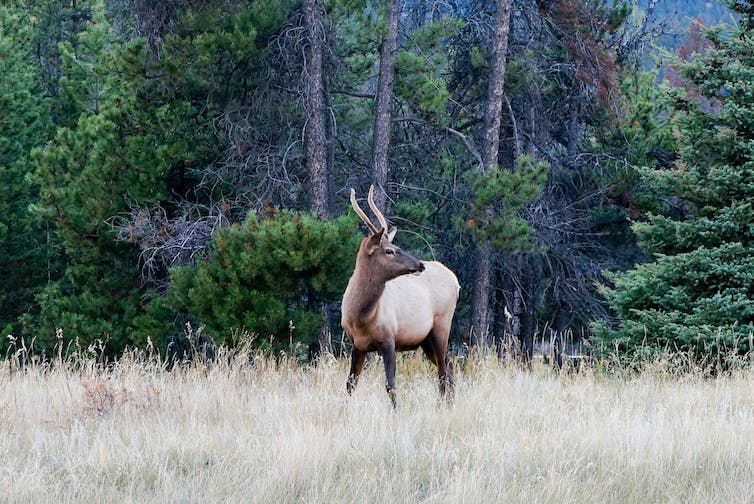 Many Canadians want to know what they can do to honour Indigenous children and further reconciliation, in light of the recent discovery of more than 1,000 unmarked graves at the sites of former Indian Residential Schools.

But what does “reconciliation” mean?

Over the last several years, our team of Indigenous and non-Indigenous researchers have been exploring what this word means to people in Canada. In doing so, we have come to understand that our relationship to the natural world is an important, yet often overlooked, part of furthering reconciliation.

When thinking about reconciliation we first thought of elements such as truth telling and education, acknowledgement of harm, reparations, healing, strengthening relationships and taking action to address harmful systems. After reading through the Truth and Reconciliation Commission’s (TRC) final report, however, our thinking expanded.

We realized that Indigenous Peoples hold a broader view of what reconciliation must involve.

Indigenous laws and spirituality place high importance on our relationship to the natural world. Reflecting these values, commissioners reported that survivors across the country repeatedly spoke about how “our relationship with the earth and all living beings” are relevant to reconciliation. Survivors felt that if “human beings resolve problems between themselves but continue to destroy the natural world, then reconciliation remains incomplete.”

Our team recognized that if we wanted to come to a holistic understanding of reconciliation, we had to move beyond our conventional, human-centric lens. 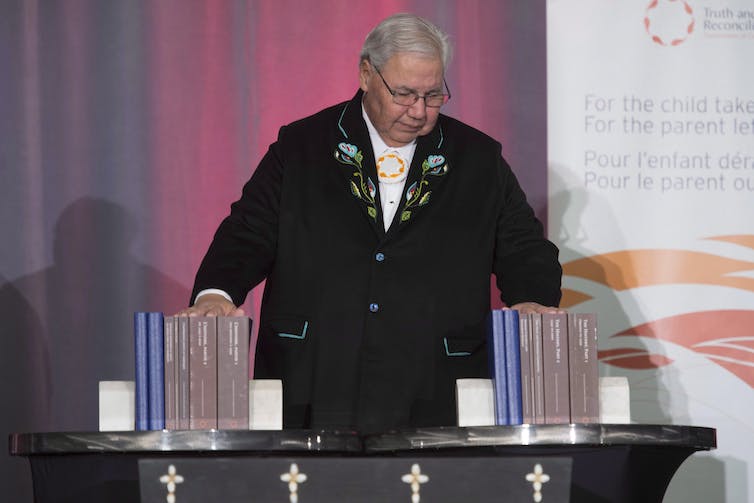 Murray Sinclair places his hands on the final report of the Truth and Reconciliation Commission, following its unveiling in 2015. THE CANADIAN PRESS/Adrian Wyld

Attitudes Toward Nature, Animals and Other Humans

Both traditional Indigenous knowledge keepers and social psychological researchers have made strikingly similar conclusions about the connection between how people relate to each other and how they relate to the earth and other living beings.

Indigenous knowledge keepers have reiterated how racism and other societal ills such as climate change, pandemics, violence and mental illness are connected. They tell us that our disconnection from the Earth and a mindset based in domination is at the root of these problems and to address these societal ills, we must reestablish our connection and relationship to the natural world.

According to Elder David Courchene, when we “develop the attitude of working together with the common spirit of loving the land, then that love can grow and extend to humanity itself.”

Social psychologists, too, echo this perspective. Researchers have found that those who feel more connected to nature tend to feel more connected to all of humanity. They hold that framing animals as similar to humans not only increases moral concern for other animals, but increases concern for other humans. And social dominance orientation, or one’s preference for hierarchy among groups, accounts for the relationship between speciesism and ethnic prejudice. 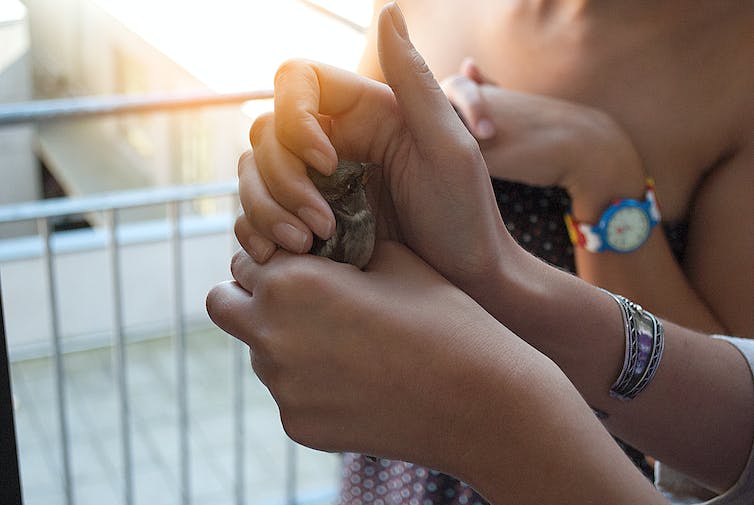 Considering traditional Indigenous perspectives and social psychological research, we wanted to understand whether people’s support for reconciliation was related to their attitudes toward nature and other animals. And if this was the case, why? To do this, our lab conducted a research study with 233 undergraduate non-Indigenous Canadian students.

At the core of our project is the idea that moral expansiveness, or the breadth of entities a person feels moral concern for, is important for motivating support for reconciliation. People who are more morally expansive tend to feel concern toward a range of entities that seem dissimilar — this might include coral reefs, bees, chickens and members of other social groups.

Our results showed that people who felt more connected to nature also supported reconciliation more. This was in part because they included more entities within their circle of moral concern. Among women, we also found a similar pattern for animal-human continuity.

So what does this mean? These findings imply that attempts at reconciliation or other social justice efforts may work especially well in natural settings.

Education, a key component of reconciliation, does not have to be limited to traditional classroom settings — it can also take place on the land. It may be possible to expand people’s circle of moral concern and, in turn, promote reconciliation through connecting people to nature. It may also be valuable to educate people on the similarities between humans and other animals.

A Call for Action

Given our current reality — that we live within a changing and destabilizing climate — it is important to move beyond our human-centric approach to addressing social issues.

This means respecting those we are connected to and ultimately dependent on — “all of our relations.” We can do so by supporting Indigenous environmental protection efforts, call upon our governments to take meaningful action on climate change and reduce our personal carbon footprint. Doing so will be good for people and all other life and entities on Earth. 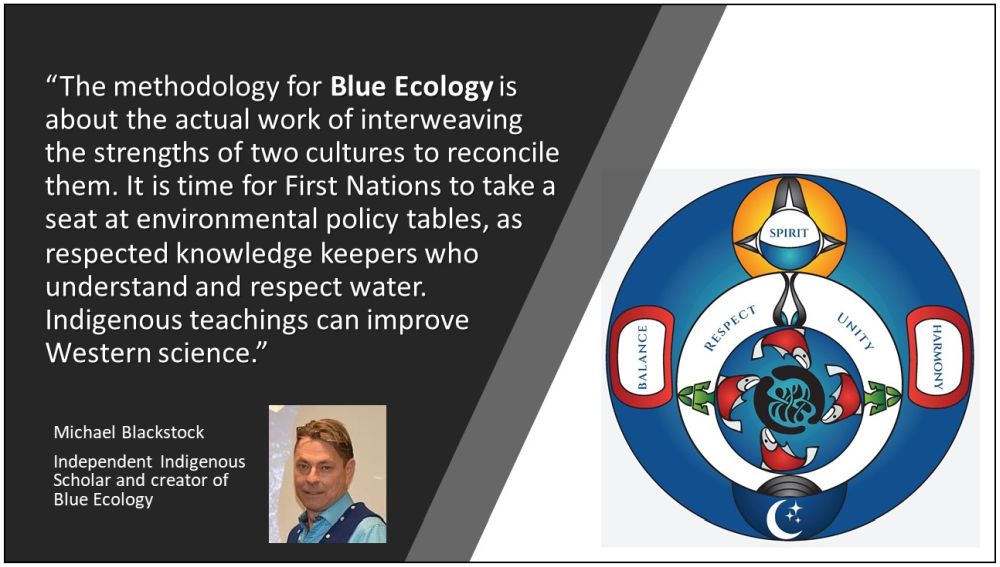 A Vision for Water Reconciliation

“Blue Ecology is an idea whose time has come. Long recognized by UNESCO and the International Association of Hydrological Sciences, Blue Ecology is defined as the interweaving of Western science and traditional First Nations teaching and local knowledge,” stated Kim Stephens, Waterbucket eNews Editor and Executive Director, Partnership for Water Sustainability in British Columbia.

“Watershed Moments 2021, which will be held later in the year, will shine a light on Blue Ecology. Michael Blackstock, the visionary behind Blue Ecology, is the newest member of the Watershed Moments Team. Michael’s work illuminates how those of us with a passion for water could, over time, develop a relationship of trust and understanding with First Nations communities.”

WHY THE FOCUS ON WATER RECONCILIATION:

“My work related to water and reconciliation has put the spotlight on a new angle,” Michael Blackstock said at a meeting of the Watershed Moments Team. “Is reconciliation just dealing with the past and acknowledging the pain and moving on, or is it something more complex than that? The complexity is that if we are asking folks to change their attitude towards water, what does that mean?”

“At Symposium 2021, the Watershed Moments Team will introduce the notion of WATER RECONCILIATION: going back to the headwaters of where we got our relationships with water and with one another wrong; and then starting back down the river of time – this time together – with a full understanding of the importance of embracing a water-first approach to planning human interventions in the environment.”

“We know that this will be hard work. Why is that? Well, what we are essentially talking about is influencing a culture-shift in all of our settings. Success would be measured over time. And the measure of success would be how BC communities put into practice what they learn from First Nations about their place-based connection to the land.”

“At the annual Water Sustainability Workshop hosted by the Partnership in 2014, Angus McAllister the well-known pollster observed that: “Water brings people together. It is a natural starting point for any conversation about common interests, and by extension, our shared future.” This Angus McAllister quotable quote provides a succinct answer to the question: Why focus on water reconciliation?”

While international recognition gave Blue Ecology early credibility and profile, there was little or no awareness within British Columbia of what Michael Blackstock had accomplished. Fast forward to November 2017. That is when the Partnership for Water Sustainability held the Blue Ecology Workshop to begin the process of mainstreaming Michael Blackstock’s work into the local government setting.

“Interweaving is about creating a new form of knowledge through collaboration by interweaving useful threads from each way of knowing into a more robust way,” states Michael Blackstock.

“Interweaving is not integration, just as equality is not about assimilation and creativity is not empirical. Interweaving is collaborative and incremental rather than a revolutionary process. Collaborators identify packets of knowledge that would benefit from the interweaving process.”

“Blue Ecology is an ecological philosophy, which emerged from interweaving First Nations and Western thought. It is meant to be a companion because it augments existing Western science hydrology rather than displacing this knowledge.”

An Introduction to Water Reconciliation

“There is a humility component to reconciliation and that can be hard for both sides when we are building a bridge to connect each other. My question for the Western science world is this: Are you prepared and willing to change your definition of water in science? And if you are, what would the change in definition look like?”

“We have yet to do the hardest work of reconciliation. The methodology for Blue Ecology is about the actual work of interweaving the strengths of two cultures to reconcile them. It is time for First Nations to take a seat at environmental policy tables, as respected knowledge keepers who understand and respect water.  Indigenous teachings can improve Western science.”

“In British Columbia we can become a water leader together by embracing Blue Ecology. It does not mean we have to give up Western science. Rather, it is fixing a flaw to make it even better by using the expertise that Indigenous people have in their science.”

Blue Ecology has five guiding principles and aligns with the whole-system, water balance approach that the Partnership for Water Sustainability in British Columbia champions. Adoption of the principles – Spirit, Harmony, Respect, Unity and Balance – would move Blue Ecology from theory to practice, as an aid for water managers 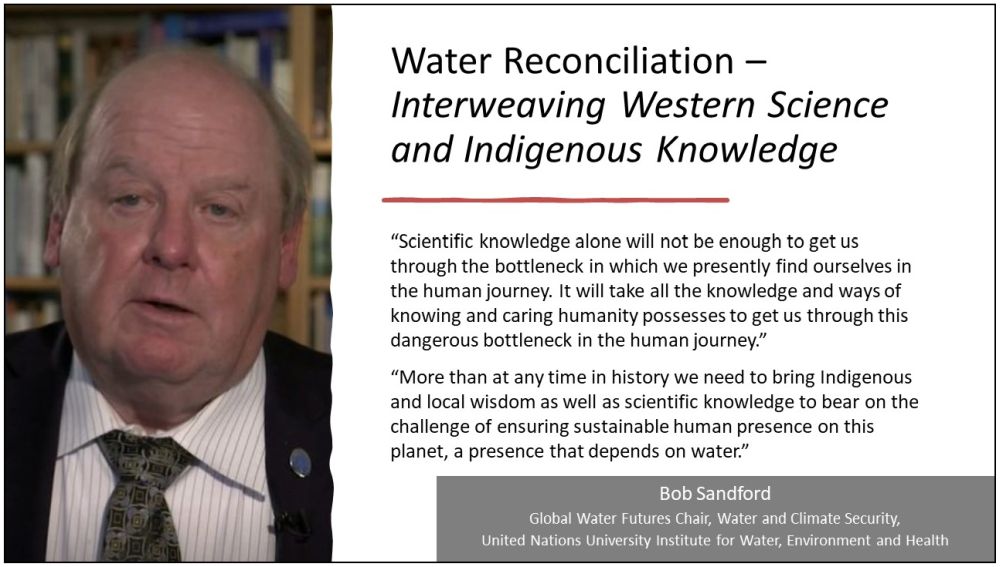