LIVING WATER SMART IN BRITISH COLUMBIA: “Everyone has a role to play in advancing Green Infrastructure implementation as we collectively travel along a path to find upstream, proactive solutions to climate change impacts and growing urban centres,” stated Dr. Joanna Ashworth, co-developer of the self-directed online course on Green Infrastructure Policy, Design and Practice launched by Simon Fraser University in 2021

The edition of Waterbucket eNews published on February 2, 2021 featured the work of Dr. Joanna Ashworth in the Faculty of Environment at the Simon Fraser University. She has emerged as a champion for green infrastructure implementation in the Metro Vancouver region. 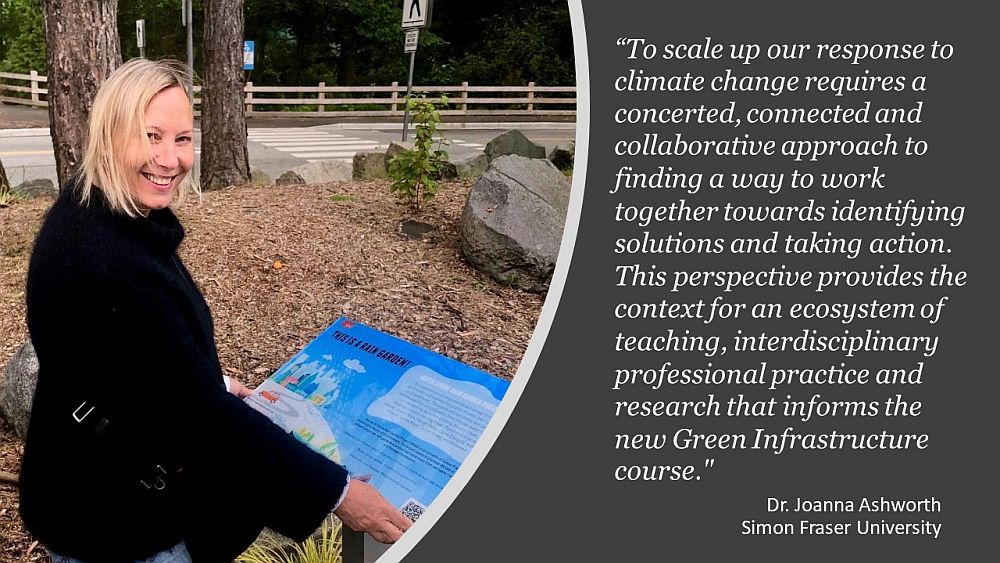 Inspired by a ground-breaking campaign to install 12,000 rain gardens in the Seattle/Puget Sound region of Washington State, Joanna Ashworth walks the talk. She is Project Director for the North Shore Rain Garden Project. Her vision is that a region-wide rain garden program would build connections between and among neighbours, citizens, community organizations, schools, and local governments.

Joanna Ashworth has also spearheaded development of an online course on Green Infrastructure policy, design and practice. A desired outcome is to influence professional practice in British Columbia.

“Whether it’s the community coming together to build rain gardens or adopt catch basins, dedicated volunteer streamkeepers who put in countless hours restoring and protecting important salmon habitat, or government decision-makers and employees enacting policies, everyone has a role to play in advancing Green Infrastructure implementation. There’s more work to be done as we collectively travel along a path to find upstream, proactive solutions to climate change impacts and growing urban centres,” states Joanna Ashworth.

A Self-Directed Course on Green Infrastructure in Urban Centres

“Every significant innovation results from a magical combination of timing, preparation and luck. So true for the creation of a new online course on Green Infrastructure, or GI, at Simon Fraser University. After several years of promoting the use of rain gardens in communities, including offering workshops, my colleagues and I were delighted when the Adaptation Learning Network, awarded funding for us to develop an online course.”

“With these funds, the SFU team – in particular Nick Mead Fox, a researcher from  the Faculty’s Pacific Water Research Centre – began in earnest to develop a comprehensive course on Green Infrastructure that would meet the learning needs of the various professional disciplines who have the power to influence the integration of GI systems into city and regional infrastructure – systems that support climate resilience, rainwater management, water quality and protect against the heat island effect while increasing liveability. Such great co-benefits!”