Is there a connection between Pacific Ocean warming and BC’s changing climate?

May 9, 2016 - Posted in Era of Weather Extremes, State of Water in British Columbia

The Blob was the name given to a large mass of warm water in the Pacific Ocean off the coast of North America. It was first detected in late 2013 and continued to spread throughout 2014 and 2015. However, due to the formation of a strong El Niño, the Blob rapidly cooled and mostly disappeared before 2015 ended. Research shows that El Niño is a Blob killer. There have been “blobs” in the past and El Niño has always erased them within a few months. The El Niño that BC just experienced did just that. Below, Faron Anslow explains what this means and why it matters. 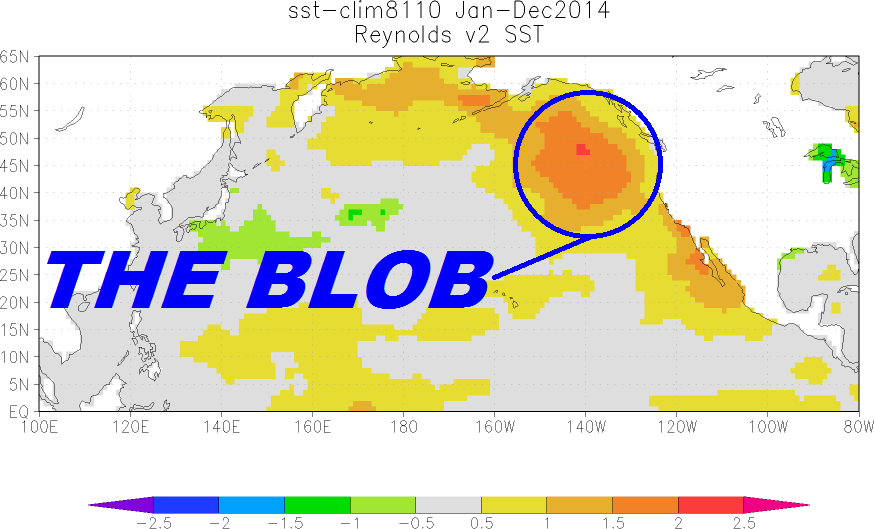 “There has been confusion in the media regarding how or if ‘the Blob’ influenced the weather of BC in 2015,” observes Faron Anslow

“The Blob did not cause the record warmth and drought of 2015, but may have contributed to warmer temperatures in western BC,” states Faron Anslow. “The record was caused by a persistent ridge of high pressure and we do not have a good explanation for why it was so persistent at this time, thus cannot predict with great confidence. Most importantly, the ridge of high pressure caused the Blob, not the other way around.”

“During a normal winter, the North Pacific Ocean loses heat. The weather from 2013 through 2015 prevented the cooling from happening as fast. As a result, the ocean became warmer than normal. Much of this was caused by the high pressure system and the relatively calm conditions that came with it.”

“The confusing part is that high pressure systems also lead to warm temperatures and dry conditions independently of what the ocean is doing, and over a large spatial scale. The record heat of the first 2/3 of 2015 arose because of such high pressure systems combined with warm air carried northward. The influence of the warm ocean was probably secondary.”

“El Niño typically has a strong warming effect on BC. Already 2016 has been very warm, with a record-breaking heat wave in April,” continues Faron Anslow.  “This will very likely continue into summer even though the event is coming to an end. El Niño has also brought warm water near our coast, and this may help warm western BC additionally this spring and summer.”

“Based on Environment and Climate Change Canada’s seasonal forecasts, there is reasonable confidence that spring and early summer 2016 will be warmer than normal, and communities should plan for that. Snowpacks this past winter were above normal in southern BC, but much below normal in the northern half of the province. Additional warmth will reduce snowpack quickly. Precipitation cannot yet be forecast with high confidence on a seasonal basis, so rainfall could be a saviour.”

“We have no reason to expect the dominant high pressure systems to return that caused the Blob, and that helped cause the record breaking heat of 2015. But, we cannot rule out that high pressure will dominate, or at least visit us for a heat-wave or two. So records are still possible,” concludes Faron Anslow.

DOWNLOAD: Frequency of marine heat waves in the North Atlantic and North Pacific since 1950

READ: Feast AND Famine: Is there a connection between “the Blob” and the Changing Climate in BC?