FLASHBACK TO 2008: “Adaptation to climate change: it’s all about the water” – British Columbia’s policy position 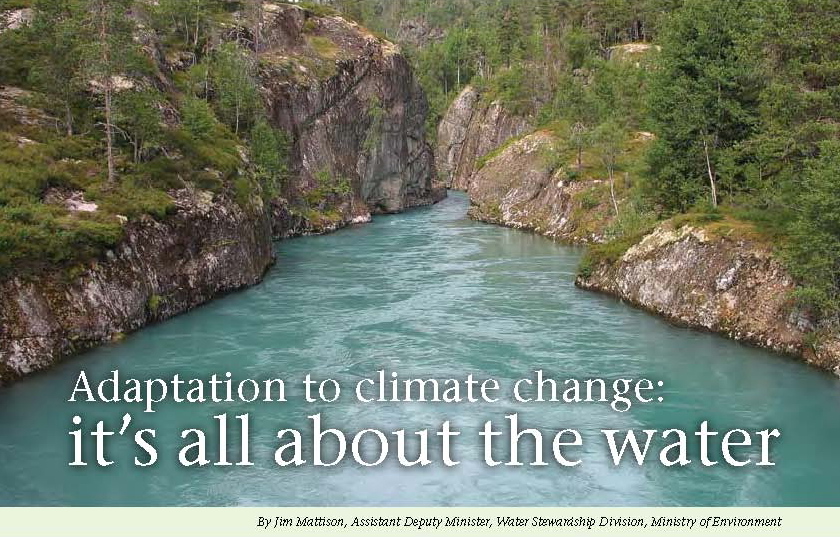 “Mitigation is alleviating the effects of climate change through reducing greenhouse gasses,” Mattison stated. “Adaptation is responding to the changes that will inevitably occur.”

We need public processes at the watershed level that develop information and inform decision-making in a public way. We need to be out in publicensuring people understand the science. We need to combine disciplines and seek the synergistic effects of what we do. We have to bring the focus of public discussion to deal with the tough policy decisions that we have to make. And we need to get started,” concluded Jim Mattison.

To download article by Jim Mattison that was subsequently published in BCWWA’s Watermark Magazine, click on Adaptation to climate change:  it’s all about the water.

Three months later, in June 2008, the Province released Living Water Smart. The 45 actions and targets in Living Water Smart establish expectations vis-a-vis how land will be developed (or re-developed) and water will be used.

The Green Communities Initiative complements Living Water Smart and comprises plans, strategies and enabling tools to achieve the land and water stewardship vision. Together, the two initiatives represent a call to action:

“Embedded within Living Water Smart is the Water Sustainability Action Plan for British Columbia. The Action Plan was conceived as a partnership

umbrella for on-the-ground initiatives that promote water stewardship across the province, and that also inform Provincial policy through collaboration and shared  responsibility in moving from awareness of need to actions on the ground,” reports Kim Stephens, Executive Director of the Partnership for Water Sustainability in British Columbia.

“Released in February 2004, the Water Sustainability Action Plan for British Columbia was developed through a partnership between the Province and the original Water Sustainability Committee (WSC) of the BC Water & Waste Association. The WSC was then responsible for program delivery from 2004 through 2010,” explains Kim Stephens in providing historical context.

“At the end of 2010, the WSC membership metamorphosed into a stand-alone legal entity, namely: the Partnership for Water Sustainability in British Columbia.  The Partnership is an autonomous not-for-profit society; is responsible for building on the Action Plan foundation; and is the hub for the ‘Convening for Action in British Columbia’ network.”