Vision for Settlement Change in Balance with Ecology

Incorporated as a non-profit society in November 2010, the Partnership for Water Sustainability in British Columbia had its genesis in the Water Sustainability Committee of the BC Water & Waste Association. Since 2003, the committee has been the hub for a “convening for action” network that has been advancing change in a local government setting. Going forward, the Partnership is now that hub.

The Partnership vision is that water sustainability will be achieved through implementation of green infrastructure policies and practices. The Partnership mission is to facilitate change by helping the Province implement Living Water Smart, British Columbia’s Water Plan and the Green Communities Initiative on the ground.

The Partnership is building on and continuing the work that has gone on before under the umbrella of the Water Sustainability Action Plan for British Columbia. The Action Plan has allowed the Province to leverage partnerships to greatly enhance the profile and resulting impact of Living Water Smart since its release in 2008.

“The strategy for leading and implementing change is called Convening for Action in British Columbia. We describe it as a ‘made in BC’ process’ because the approach to building leadership capacity is precedent-setting,” states Kim Stephens, Partnership Executive Director.

“In 2003, we moved into a vacuum as the Water Sustainability Committee. Through collaboration, we built a network in the local government setting. We have demonstrated that the collaborative approach works. Morphing the ‘convening for action’ network into a legal entity is a natural evolution. It means we can raise the bar for doing business differently. It opens new doors and broadens our reach. It enhances our ability to connect with champions in other jurisdictions and sectors who share a vision for British Columbia.”

“The shared vision is that settlement change will be in balance with ecology: the right development in the right place at the right time. We can achieve this vision if development is guided by a ‘design with nature’ philosophy: start with green infrastructure and truly restore the urban fabric.”

More About Convening for Action: 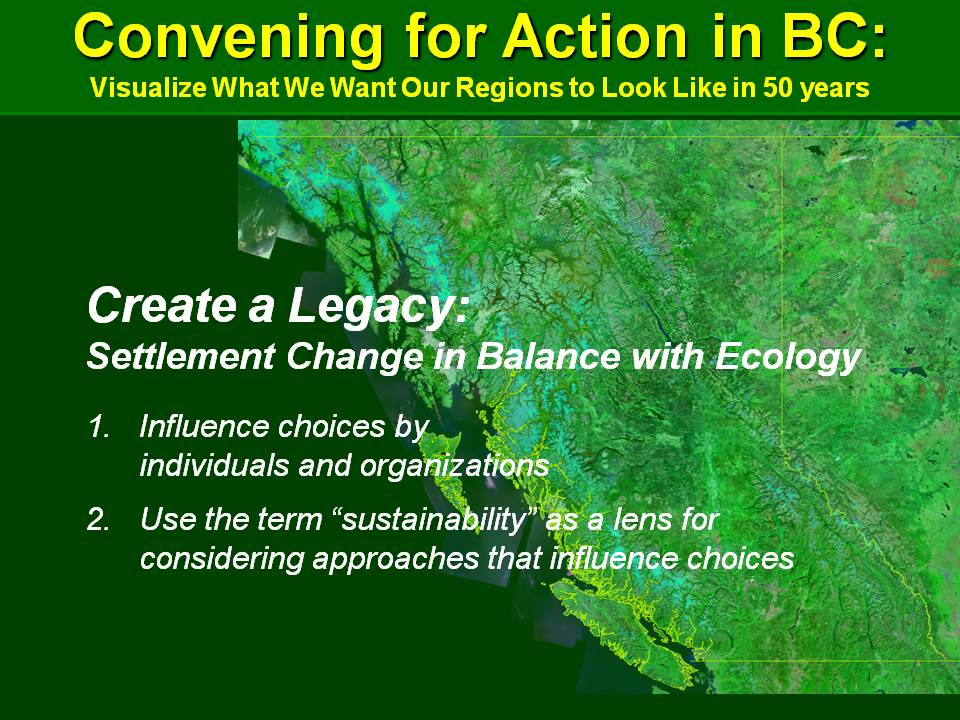