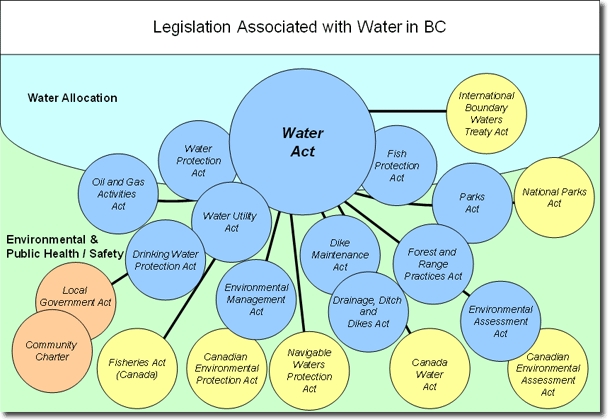 Living Water Smart, BC’s Water Plan sets the direction for changes to use of water and development of land in British Columbia. One-third of the 45 actions in Living Water Smart either require legislative change or would be strengthened with changes to water laws.

The Water Act is the heart of the Province’s water governance framework. “A key commitment in the plan is to consider amendments to the Water Act to improve the protection of ecological values, provide for more community involvement and provide incentives to be water efficient,” stated John Slater, Parliamentary Secretary for Water Supply and Allocation, in a letter sent to all local governments in December 2009.

To learn more about the scope and process, click on British Columbia proceeds with Water Act Modernization in 2010.

The Water Act is the principal law for managing the diversion and use of provincial water resources.  Established in 1909, B.C.’s Water Act is the primary piece of water management legislation and plays a key role in the sustainability of B.C.’s water.

Over time parallels can be seen between resource development activities, technological advances, institutional changes, and shifts in society’s values which, in turn, have prompted government review of B.C.’s water laws. Today, major changes in all these areas are occurring. In response, government is reviewing the water law framework.

For information about the evolution of water laws, click on B.C.’s Water Law Framework.

The Province is proceeding with Water Act Modernization in parallel with local government capacity-building that is taking place under the umbrella of the Water Sustainability Action Plan. The desired outcome is water sustainability – both in terms of how water is used and how water runs off the land.

To learn more, click on BC’s Water Act Modernization will help connect the dots to stream health and liveable communities.