Drinking Water Protection in BC

Many small water systems throughout British Columbia, particularly those on a surface water source, have no effective or minimum treatment in place, and have chosen to remain on a boil order, often for many years. 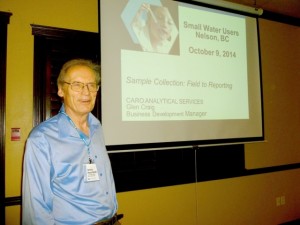 “This situation may not be permitted to continue for much longer, and I would urge all small systems in this position to begin planning now to take the steps necessary to comply with the Drinking Water Protection Act and Regulation, as well as with other requirements of their Drinking Water Officer,” writes Denny Ross-Smith of the Small Water Users Association of British Columbia.

To download a copy of the article, click on SWS on long-term boil order: suggestions to comply with provincial drinking water legislation. Watermark Magazine is published by the British Columbia Water & Waste Association (BCWWA).

About the Small Water Users Association

The Small Water Users Association of BC is a new non-profit society dedicated to serving the interests of small water systems (1 to 300 connections) throughout British Columbia.

In the spring of 2003, discussions between a number of small water system managers in the west Kootenays identified the need for a new association. The existing water associations in BC were primarily serving the interests of larger water systems (municipalities and large improvement districts). Smaller systems lacked access to information on a broad range of topics, such as technology options and sources, regulatory requirements, government assistance programs, operator training and certification and other matters of interest.