ROLE OF THE COMMUNITY LEADER AS CATALYST: “Effective community engagement depends on involving people in decisions, sharing responsibility, and making them more accountable. This includes engaging generations, old and new. Our connection to the past should inform the future,” stated Ian Graeme, community leader and founder, Friends of Bowker Creek Society

The edition published on on May 3, 2022 featured Ian Graeme, community leader and founder of the Friends of Bowker Creek Society in the Capital Regional District on Vancouver Island. His vision and energy inspired others and created the early momentum that galvanized support for implementation of the 100-Year Action Plan to daylight Bowker Creek.

Role of the community leader as catalyst

Since 2008, the Partnership for Water Sustainability has been an observer of the Bowker Blueprint process and journey. A thread that weaves through the Bowker storyline is the right people in the right place at the right time, over time. It is a story about people who really care. Their passion and commitment are impressive.

Conversations delving into the “story behind the story” inevitably focus on the catalyst role quietly played by Ian Graeme beginning in the mid 1990s. 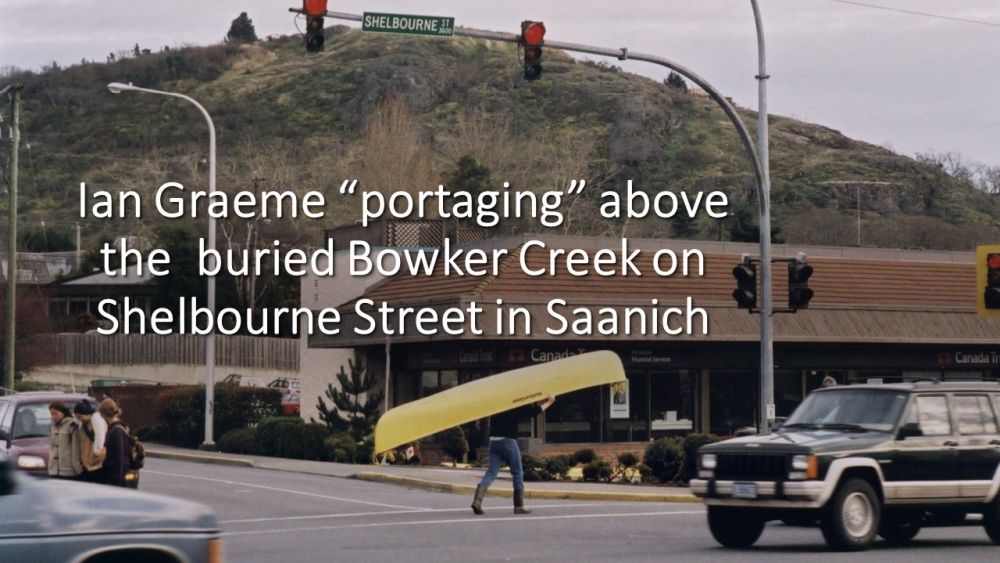 The Right People at the Right Time

When interviewed in 2010 about the genesis of the Bowker Blueprint, founding Bowker Creek committee members Ian Graeme and Chris Jensen both emphasized the crucial role played by Rob Miller, former Supervisor of the Capital Regional District’s Stormwater Quality Program.

Flashback to the beginning

“Collaboration works both ways. Rob needed community support to be effective in his job and Ian showed that there was a community voice. Together they worked to create the Bowker Creek Forum in 2002. This event was the start of the real coordinated effort,” stated Chris Jensen.

“Ian Graeme was the key community leader and Rob Miller the key government leader. Through their collaboration, they started the trickle which has led to the flood of momentum.”

“When I first got involved, I contacted Rob Miller for streamflow data for the purposes of my university studies. But there was none. Because Rob was receptive to my need, he connected me with Peter Fell who was then instrumental in having two stations established. These have proven to be invaluable.”

Chum fry were spotted in Bowker Creek on Vancouver Island in March 2022, likely a first since the 1930s. (Gerald Harris, Friends of Bowker Creek)

“Fast forward more than two decades and now salmon fry are back swimming in Bowker Creek for the first time in a century,” Chris Jensen stated in a recent conversation about the extraordinary contribution by Ian Graeme.

“I find myself reflecting on just how fortunate I was to end up living beside Bowker Creek. It helped shape the course of my life. I had a strong connection to its water and was able to connect with a like minded individual – Ian Graeme

“I find it rather amazing to think what was once a rather sad little creek was actually the foundation…the opportunity…for decades of meaningful work…satisfying work.”

A Formula for Success

“Effective community engagement depends on involving people in decisions, sharing responsibility, and making them more accountable. This includes engaging generations, old and new. Our connection to the past should inform the future,” emphasized Ian Graeme in the 2010 interview. His quote is timeless.

The 100-year Bowker Creek Action Plan is about an intergenerational commitment to creating “islands of nature” within the urban environment and restoring a “ribbon of blue”. The players comprise government and community. All embrace shared responsibility.

In 2010, the Partnership and the Bowker Creek Initiative (BCI) co-hosted the second Bowker Creek Forum. To raise the profile of this “watershed moment”, I interviewed founding members of the BCI Steering Committee for a series of articles that we published on Waterbucket eNews. All conversations inevitably focused on the community leadership provided by Ian Graeme.

Role of the Community Leader as Catalyst for Action: An Interview with Ian Graeme

In September 2021, the Partnership for Water Sustainability released Living Water Smart in British Columbia: Bowker Creek Blueprint is a Beacon of Inspiration. It is not a report. Rather, it is a short history of building bridges of understanding from the past to the present and future.

The focus is on the champions – within local governments and in the community. These dedicated individuals provide leadership and motivate others to strive for the greater good. Without determined champions such as Ian Graeme, nothing gets started and nothing happens.

The Bowker Blueprint is the outcome of a unique multi-jurisdictional effort. The Bowker Creek Urban Watershed Renewal Initiative (BCI) is a collaboration between local governments, community groups, post-secondary institutions, and private citizens to improve the stream and creekshed.

In the concluding section of A Beacon of Inspiration, Ian Graeme provided his reflections on the Bowker process and journey over three decades. His reflections follow.

“In 1995, I got involved in a Local Area Plan that was under development in Saanich; and started advocating for changes in watershed and stream protection policies. To draw attention to the need for action, I organized a series of community walks and developed a ‘watershed tour’ slideshow and took it around the community,” Ian Graeme remembers.

“When we incorporated the Friends of Bowker Creek Society, the mid 1990s was a time of a greenways movement in BC. This became one of our four goals: create a Bowker greenway to increase access to the creek. If more people became familiar with the creek, we believed, public interest would drive creek restoration.”

“More than two decades later Oak Bay, Saanich and Victoria have all issued proclamations supporting the UN Decade on Ecosystem Restoration. This is a rallying cry to prevent, halt and reverse the degradation of ecosystems caused by current and past generations. The Bowker Blueprint is a great example of something that is tangible and aligns with the overarching policy commitment in the municipal proclamations.”

Why Relationships Matter Most

“Technical knowledge is not enough. You learn that technical competence alone is not going to get you there. That is what I want to pass on to people. If you have a technical problem, it is relationships that matter most. Strong relationships help make the BCI agile,” adds Ian Graeme.

“We need agility because we do not have the time and resources. At one level, all of us are too busy. At another level, and given the challenges posed by the issues of the day, we need to move on opportunities very quickly.”

“Over a career, you do learn that it is all about understanding people. Technical knowledge is incidental sometimes.”

“Soren Henrich has done an awesome job in re-energizing the Friends of Bowker Creek Society. He has learned, through his years of experience, how to attract talent and get residents working on projects that mobilize their passion.”

“I used to ride my bicycle to school and cross Bowker Creek twice a day on Richmond Road. In 1971 or 1972, the City of Victoria culverted that section of the creek. I remember thinking why are they doing that? Something is not right about this,” recalls Ian Graeme.

“We are burying an opportunity and part of Victoria’s waterfront. Here we are 50 years later, and we have this game-changing daylighting feasibility study. I am hoping to see that culvert removed. It is now mission possible.”

Game-Changing Action by the City of Victoria

Ian Graeme provided this perspective on the Council Meeting in February 2021 when councillors passed the 12-clause motion that committed Victoria to look for opportunities to daylight Bowker and other historic creeks:

“Two decades ago, as a citizen, I might have felt compelled to say ‘well, I’d like to add A, B, C and D.’ When I saw the staff presentation to Council by Jas Paul and Brianne Czypyha, I thought ‘there is little I could add’. They covered it all and they communicated it with professionalism, with commitment, and they came across as the voice of the BCI. They nailed it.” 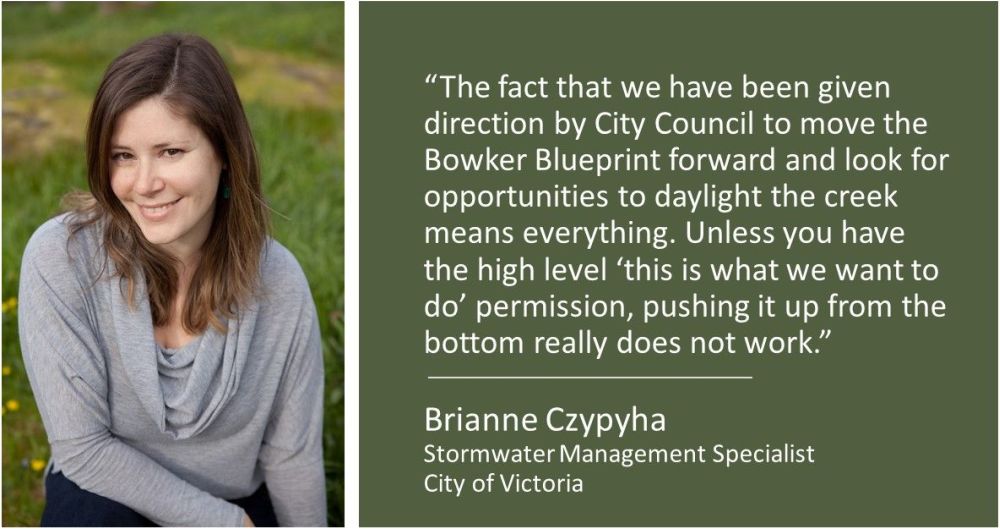 “The land that is known as Kings Park had been owned by BC Hydro since the late 1950s. Saanich, with the active encouragement of local residents, recently bought the land with the proviso that the community help contribute to the purchase price. In July 2021, the Saanich Mayor asked Victoria and Oak Bay to contribute financially because the park would serve residents in all three municipalities,” explains Ian Graeme.

“It was interesting to observe that the Bowker Blueprint was a central argument about why the three municipalities should collaborate on the purchase. This was done outside the BCI. But it was another example of collaboration which I think has been reinforced by watershed thinking.”

“The acquisition serves all our municipalities; it is integral to the health of the creek; and what we do upstream will have benefits downstream in Oak Bay. Mayor Haynes’ request promoted some great conversations between Councils.”

Reconnecting Kids with the Creek

“Municipal parks tend to be manicured settings. However, there is an increasing recognition of the value of nature within cities as well. Bowker is an example of where, over time, communities can create an ‘emerald necklace’ running through the urban Greater Victoria region.”

“Imagine if kids could once again touch the creek and walk through it in their bare feet. And all within walking distance! The daylighting feasibility study shows what is technically possible in creating the emerald necklace,” concludes Ian Graeme.