CLIMATE ADAPTATION CONTEXT FOR WATERSHED MOMENTS 2021 / BLUE ECOLOGY VIRTUAL SEMINAR: “We are giving the public this false sense that we have a level of control that we do not have. That is why I did the Climate Change Thermostat – to get that idea across to audiences,” stated Michael Blackstock at the founding event for the Blue Ecology Institute (September 2021)

INTERWEAVING: A CALL FOR AN ATTITUDE CHANGE

“Interweaving is not integration, just as equality is not about assimilation and creativity is not empirical. Interweaving is collaborative and incremental rather than a revolutionary process. Collaborators identify packets of knowledge that would benefit from the interweaving process. Blue Ecology is meant to be a companion because it augments existing Western science hydrology rather than displacing this knowledge,” states Michael Blackstock.

“There is a humility component to Water Reconciliation and that can be hard for both sides when we are building a bridge to connect each other. My question for the Western science world is this: Are you prepared and willing to change your definition of water in science? And if you are, what would the change in definition look like?” 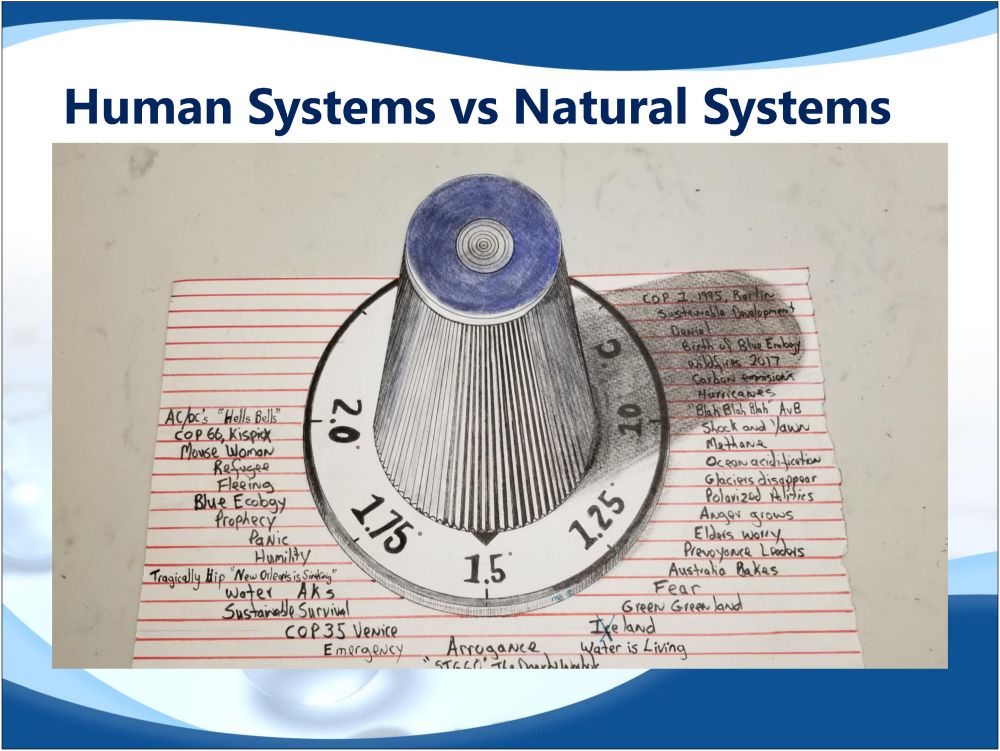 Michael Blackstock’s Climate Change Thermostat image draws attention to the flaws in a “slice-and-dice” approach to science that does not account for two things: the interaction of variables within a system; and “preciseness versus accuracy” in the calculations.

“Michael Blackstock is an original thinker. When he explained Blue Ecology at the founding event workshop, he caught the attention of the group with three big ideas that I describe absolute gems,” stated Kim Stephens, Executive Director, Partnership for Water Sustainability in British  Columbia.

“His sketch of a Climate Change Thermostat is brilliant. It speaks to arrogance in combination with naivety. Does anyone really believe that technology can regulate global temperature to one decimal place? It took Michael the artist to capture the absurdity in a cartoon. What did we learn in math about significant figures? We learned that there is a fundamental difference between preciseness and accuracy. One decimal place? As Michael said at the workshop, really!”

“Michael also talked about the Periodic Table of Elementswhich many of us learned about in high school chemistry classes. Michael’s observation is that we stumble from one “periodic table crisis” to the next. Why is this an important observation? This leads us to Michael’s third gem which is the Heat Balance. Carbon accounts for 4% compared to 95% for water. Although this has been known for decades, Michael pointed out, this big picture perspective is not front and centre in climate change deliberations.”

“In summary, what Michael’s three gems tell us is that missing from the discussion is an understanding of how a system functions as a whole.”

Curious about the work of Michael Blackstock? Visit the Water-Centric Planning community-of-interest. Click on this link: https://waterbucket.ca/wcp/category/blue-ecology-michael-blackstock/

“In recent memory, there was the leaded gasoline concern in the 1960s and 1970s that resulted in unleaded gas. There is also the DDT crisis to consider. And remember when ozone was the big threat. And of course, the threat of nuclear war was in a sense about uranium.”

“It seems like we are in this cycle where there is always some element on the periodic table that is throwing us into crisis. And the assumption is that technology will rescue us. Currently the periodic table crisis is carbon,” explained Michael Blackstock.

“When you examine what comprises the heat balance, carbon is definitely a factor. But people do not understand the linkage between water and the heat balance. The discussion has been going on for decades.”

“But nobody is paying attention. The general public thinks if we get rid of carbon, then we are all good. But that is only a partial solution. Water is fundamental to a whole-system solution.”

“Every year I listen to the climate change debates. The scientists are always talking about temperature rise to one decimal place. An image of a committee with their hands on a thermostat popped into my mind. And they are trying to adjust it.”

“There is so much arrogance in that, and so much naivety at the same time, to believe that we actually have the ability as a global human society to turn this dial plus or minus 0.1 degrees. The reality is that we do not have that ability.”

“As a result, we are giving the public this false sense that we have a level of control that we do not have. That is why I did the artistic image – to get that idea across to audiences, concluded Michael Blackstock.”